Antonio Senzatela has dominated the second half of the season for Asheville. Charlie saw the Venezuelan pitch in person and interviewed the young pitcher. Also included are the top stats and videos of Rockies prospects.

Antonio Senzatela, a right-handed pitcher from Venezuela, is showing signs that he can compete in the minor leagues and isn't just a Dominican League phenom. Affectionately known as ‘Senze' among his teammates, the right-hander is on a recent tear for Low-A Asheville. After initially struggling in the first half of the year with a 4.42 ERA, he's turned it on since the All-Star break, posting a 1.77 ERA with a .206 average against. They're impressive numbers, which earned him the South Atlantic League's Pitcher of the Month award for July.

Senzatela has the foundations of a solid pitcher; as he throws an above-average fastball that locates well. His fastball sits around 91-93, but he can ratchet it up to 96 when he wants to. Reports out of the DSL initially had him topping out at 95 mph, but it appears the teenager is still adding velocity as he matures. The fastball has some movement, as it tails in on right-handed batter and like all of his pitches, he can spot it with an easy throwing motion. 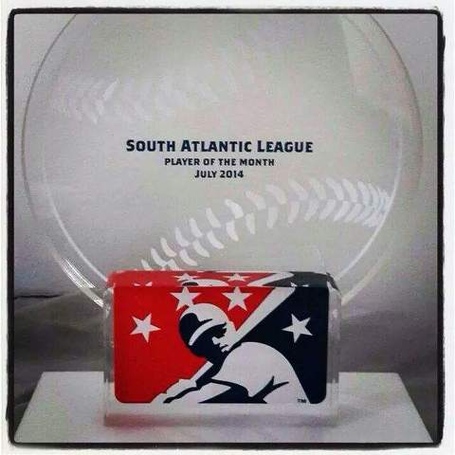 Senzatela pairs his fastball with an average changeup which he can locate anywhere. While it doesn't tumble like Jayson Aquino's, and it doesn't skid away like Eddie Butler's can, the change comes from the same motion as his fastball and he has very good accuracy with it. The velocity change on this pitch, creates a nice difference which throws the timing off for the hitters.

The curveball was a pitch that I had heard mixed reports about, indicating that he tends to throw with a stiff wrist and doesn't always get much drop in it. However, the first curve that Senze threw was beautiful, it started in the middle of the strike zone before plunging down and away from the right-handed batter and ending up low-and-away, causing the batter to swing and miss.

Unfortunately, that was the only time he threw it with authority, and it wasn't utilized very often. One of the knocks on Senzetala has been a lack of strikeouts, a problem that might be cured with a solid curveball in his repertoire. I spoke to the Venezuelan the next day and he showed me the reason for not throwing many curves.

Senzetala has been battling an injury on the middle finger of his pitching hand, as half of his nail is ripped off where the finger puts pressure on the ball and a resulting blister is expanding. He said the pressure from throwing curves has caused his nail to give way, making it very painful to throw that pitch at the moment. It sounds like a problem he's been dealing with for quite a while and may explain the stunted development on his third pitch.

Just a year removed from the Dominican League, Senzatela looks a lot like Jhoulys Chacin on the mound, although at 6-foot-1 he's a couple inches shorter than the Rockies starter. They have the same demeanor however, and similar throwing motions. As a comparison, Chacin was a better strikeout pitcher in the minors, but Senzatela has shown superior control with a lower walk rate.

Based on the success of so many pitchers throwing changeups who have come out of the DSL Academy, I asked Senze if that pitch was a focus there. Chacin sticks out as having a strong change, but it's also been a staple of other latin players such as Jayson Aquino and former Rockie Edwar Cabrera. However, Senzatela indicated that it wasn't taught there, that in the academy, they primarily target fastball command and let the pitchers work on the off-speed pitches on their own. With so many successful changeup artist coming out of the Academy, I have to think it must be taught in the dorms and passed down among peer groups.

With his current mix of pitches, Senzetala is well equipped to move quickly through the Rockies organization. The 19-year-old still has two more years before he can be exposed to the Rule V draft, so there should be plenty of opportunity to reach at least Double-A before the Rockies have to make a decision on his roster status. Hopefully, the Venezuelan will make progress on his curveball however, or his ceiling could be limited to a back-end starter or a bullpen contributor.

Hottest videos of the week

Kyle Parker ties the game with his second home run of the night, while wearing a flag jersey for the Sky Sox. #Murica

David Dahl's not a player, he just crushes a lot-- over the scoreboard, in deep right-center for Modesto.

Patrick Valaika with a gapper for his 24th double of the year.

Nate Causey causes a collision in the outfield on this home run in Grand Junction.