The Rockies haven't been winning many games on the road this season (as usual), but at least they are winning the games against the Giants.

It never fails. Whenever the Rockies and Giants get together, bizarro baseball ensues. However, what is unusual, and downright refreshing for that matter, is the Rockies sudden habit of winning games in what for them has been a traditionally terrifying venue.

This game can be viewed through several prisms, so let's dive into a few.

1) The Giants lost the game in the first four innings

This easily could have been a Rockies road script we've seen before (mostly in previous seasons) where the inept offense spoils a great pitching performance. The bats struck out eight times, only walked once, and recorded just six hits with DJ LeMahieu's fifth inning double being the only one that went for extra bases.

However, tonight the Rockies had a secret run scoring weapon in the form of San Francisco consistently shooting themselves in the foot. That's how they drew first blood in the opening inning. Charlie Blackmon reached on a throwing error from second baseman Joe Panik, moved to second on a fly out, went to third on a pick off error from pitcher Jake Peavy, and later scored on a Justin Morneau sac fly.

They would grab two more runs in the fourth with the help of two more Giant throwing errors via Brandon Crawford, two hits, a Corey Dickerson sac fly, and a run scoring balk from Peavy.

Those would be all the runs the Rockies would get on the night, although they should have had more in the seventh, which leads us to this...

2) The Giants are a bunch of crybabies

Home plate umpire Doug Eddings had a rough night. First of all, he didn't give Jake Peavy the normal 27 inch wide zone the home team is apparently allotted by MLB rules in this park, which made Peavy so angry he almost spontaneously combusted on the mound, and then he called Buster Posey out on strikes on a pitch which was clearly below the zone. Now the pitch wasn't nearly as far out of the zone as we're used to seeing strikes called in the ninth inning here when the Giants have a one run lead and 42,000 umpires dressed in orange are screaming in excitement, but still far enough out of the zone for Bruce Bochy to have a conniption and get rung from the game.

Of course, Bochy wouldn't have come off as such a blowhard if the umpires in New York hadn't inexplicably overturned a run scoring play at the plate for the Rockies the previous inning. DJ LeMahieu appeared to get his foot home before a tag was applied in the seventh, but a San Francisco challenge ended the top of the frame. Granted, the play was super close, and I probably wouldn't have been too upset if the call on the field was "out" and it was upheld, but there was not nearly enough evidence to overturn that play, and it could have cost the Rockies the game.

Oh, and as usual, it wouldn't be a Rockies victory over the Giants without somebody by the bay accusing a member of the the Rockies organization of cheating. Tonight, they apparently think LaTroy Hawkins was doctoring the baseball in the ninth. 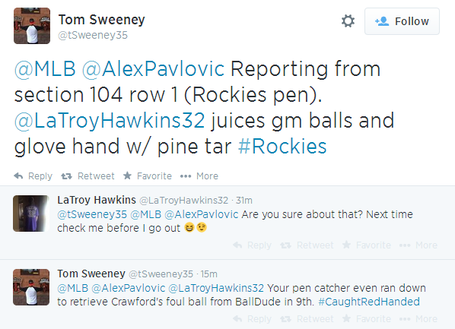 After everything he's been through, it's easy to forget that Matzek is still just 23-years-old. However, the young lefty is showing signs of getting stronger as the season heads towards the home stretch. After a better than the numbers indicate outing last time out against Kansas City, Matzek threw the ball well again tonight. He gave up his fair share of hits; eight in all including a solo home run from Andrew Susac, a double from Angel Pagan, and a triple from Michael Morse.

However, he showed a De La Rosa like ability to make a pitch when he needed to and frustrate the opponent. Matzek got the Giants to ground out ten times, three for double plays, and struck out seven while only walking two. In fact, the only out he recorded that didn't come through either a strikeout or a ground out was the diving catch by Drew Stubbs in center field.

Walt Weiss also showed faith in Matzek by allowing him to bat in the top of the seventh inning when his spot came up with a man on in two outs in a one run game. This means Weiss believed Matzek was his best option to pitch a scoreless seventh, and while that might not be saying much with this bullpen, it's a step in the right direction. Weiss' faith was rewarded too as Matzek recorded a strikeout and three grounders in his final inning of work, even pitching around a Nolan Arenado error to hold the lead.

The Rockies are 3-27 in their last 30 road games not played in AT&T Park. That's a .100 winning percentage over what would amount to about 19 percent of a season. However, the Rockies are now 4-0 in their last four games in the place they historically struggle the most. It doesn't make any sense, but it's sure gotta be infuriating to the Giants and their fans.

The Rockies seem to take pride in this as well. They were extra pumped up during handshakes after this particular win. Michael McKenry was even jumping up and down a few times as if the team won something big before he greeted LaTroy Hawkins. Maybe it was just a an emotional, close game, but it also seems that this club is intent on playing spoiler when it comes to San Francisco. Hey, it sounds like a good idea to me.

Since June 8th, the Rockies and Giants have played very similar baseball. The Rockies awful 24-44 mark over this time has been well documented on this site, but the Giants have been only 2.5 games better putting up their own dreadful 26-41 showing. Those are good bad for the second and third worst records in all of baseball over that span. Only the Texas Rangers have stunk it up more going 20-47.

Perhaps the Rockies aren't winning these games because they are playing better. Perhaps the Rockies are winning these games because they are playing a team that actually got very lucky early in the season in high leverage situations on both sides of the ball and now can't stay afloat with that benefit removed. They're nothing compared to the dumpster fire that's been the Rockies over the last two seasons (a combined 38 games under .500 in 2013 and 2014), but the Giants are now a team that's 12 games under .500 over their last 254 games.

They're still tied for the second Wild Card as several other teams in the standings around them can't seem to get out of their own way, but evidence suggesting the Giants are heading in the wrong direction is now steadily mounting.

With this recent hot streak, it's becoming more and more unlikely the Rockies will lose 100 games, as they now would have to go a disastrous 9-23 over their last 32 games to arrive at that number.