The Rockies' 2009 first-round pick had a bumpy road to the big leagues. Now he's doing all the right things to stay there.

DENVER -- Tyler Matzek had two pretty awful outings earlier in August after being used out of the bullpen during a 16-inning game in Chicago. Despite the initial negative effect the unexpected appearance had on Matzek, one of his teammates believes it has already made him a better pitcher.

"It made him realize he needs to stick to who he is," Rockies backup catcher Michael McKenry said before the Rockies' doubleheader sweep of the Reds on Aug. 17. "He doesn't need to try to create things or do things other people do, but needs to try to figure out his identity and how he approaches the game."

Matzek is certainly no stranger to adversity, so perhaps that's why he's bounced back to strike out 21 batters and walk only seven in his last 19⅔ innings spanning three starts. A strange relief appearance followed by two bad starts is nothing for a guy who briefly found himself back home and wondering where his career was headed after a disastrous beginning to his second pro season.

After a solid professional debut in 2010, Matzek began to have trouble adjusting to full-season baseball. "I'd never pitched on a five-day rotation before," the rookie southpaw said, describing his early pro career. Matzek was nearly untouchable that year, allowing just 6.2 hits per nine innings en route to a 2.92 ERA and nearly a strikeout per inning. But Matzek also walked 6.2 batters per nine, an issue that spiraled out of control in 2011.

"I experienced a little bit of wear and tear and from there, it led to mechanical issues," Matzek recalled. That's when the mental issues surfaced. Despite having top-notch stuff and an uncanny ability to strike batters out, Matzek walked 96 batters in 97 innings for Low-A Asheville and High-A Modesto before being sent back to his home in Mission Viejo, Calif., to work with his high school pitching coach.

"I had to fix the mental stuff first before I could get back to where I was," Matzek explained. Once that fell into place, the young lefty got his mechanics under control and resumed his road to the big leagues after knocking some of the cob webs out.

"With those mental hiccups, the thought of never reaching the majors definitely crept in there," Matzek said. "But I just kind of refocused and convinced myself it was going to happen, then worked really hard to get here."

"Looking back on it, I'd much rather have it happen in the minors then get called up and have to go back and forth while trying to work through it," he continued.

Matzek bounced back with an All-Star campaign in Modesto in 2012. He continued to strike batters out at an alarming rate and lowered his walk rate to six per nine innings. Not great, but definitely a huge step in the right direction.

Upon arriving in Tulsa for the 2013 season, Matzek's main priority shifted to pitching to contact. His strikeout numbers suffered -- he whiffed only six batters per nine innings -- but Matzek walked a career-low 4.8 batters per nine and his 3.79 ERA was his best since 2010.

"I was shying away from contact a little bit earlier in my career," Matzek explained, "but when I got [to Tulsa], I threw as many strikes as possible and just let [the batters] it."

"They're not always going to hit it well; even the great players only hit .300, so I just let my defense play behind me while I tried to make guys mis-hit the ball," he added. 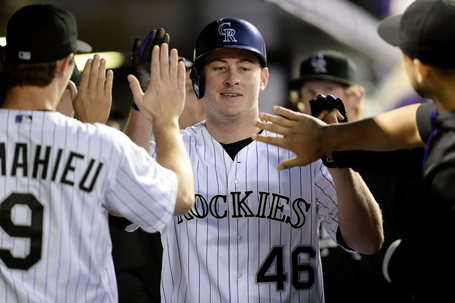 Everything came together for Matzek earlier this season at Triple-A Colorado Springs. The 2009 first-round draft pick lifted his strikeout rate to nearly a batter per inning while issuing only 4.2 free passes per nine. Sure, he allowed a career-high 9.3 hits per nine, but the reduced walks meant fewer baserunners, and Matzek's ERA -- a highly respectable 4.05 given the video-game-esque offensive environments in the Pacific Coast League -- thrived.

Matzek, for the most part has brought his Triple-A success with him to the big leagues. He is still prone to some wildness and his numbers -- 3-9 record, 5.14 ERA / 82 ERA+ -- don't look great on the surface, but there are a lot of positives to be found when digging deeper.

First, Matzek has walked only 3.4 batters per nine innings. That's worse than the league average of 2.9, but considerably better than anything he did in the minors, and actually a tick better than the 3.5 BB/9 the Rockies have posted as a team. Additionally, Matzek's 4.35 FIP, 49 percent ground-ball rate, better than average line drive rate and poor batted ball luck (.330 BABIP against; league average is .299) all suggest that improvement is on the horizon.

Matzek has also learned to not to focus on the negatives, a trait that the Rockies' veteran reserve backstop believes will turn him into an extremely viable big league pitcher. "Instead of [working on] his weaknesses so much like everyone tries to do when they get here, he's trying to enhance his strengths as much as possible," McKenry gleamed. "His idol is Clayton Kershaw, as it should be. And they have similar stuff, though [Matzek] doesn't have that pedigree yet. But Tyler's ceiling is as high as he wants to go, because he has that attitude."

"Bro, you need to throw all of your pitches," McKenry told Matzek after the game, to which the first-year hurler responded, "Dude, I'll never do that again."

Yes, of course, there's the attitude. And Matzek has the right one to succeed, even if it took some pushing from McKenry.

"When he went in that day, he was like 'I'm not throwing my curveball or my change-up, I'm just going to throw my fastball and slider,' McKenry said of Matzek's lone relief appearance of the season -- one in which he struggled to throw strikes and eventually allowed the Cubs to end the game on a walk-off sacrifice fly. McKenry had to reel in the promising rookie a little bit.

"Bro, you need to throw all of your pitches," McKenry told Matzek after the game, to which the first-year hurler responded, "Dude, I'll never do that again."

"You can't ever take away experience," McKenry added. "A guy like him is going to help this team for a long time. This year is going to be the biggest building block for that because he's learning exactly who he is and what he needs to do to get to that next level."

Matzek certainly has his work cut out for him, especially because he'll have to deal with pitching in a unique hitter's environment, and do it for a team that has struggled to stay competitive in recent years. Fortunately for the Rockies, he's up for the task.

"I don't think it takes too much of an adjustment to pitch here," Matzek said. "I had enough experience in the Springs throwing at elevation. And the ball actually moves a little bit more here."

"Being successful has more to do with lowering and raising the eye level of the hitters and sometimes starting your pitches at a different spot," he added, "not necessarily making huge adjustments."

Matzek will have to adjust to hitters the more he faces them, but he's a smart pitcher with a good head on his shoulders. He has to be, after all, to overcome the obstacles he faced while in the lower minors.

"He's just gotta continue to grow, work and learn the game," McKenry said. "As he gets to know the league, he's going to get better and better."

"Tyler's going to be very special."

In a season in which the Rockies have had very little to be happy about in terms of their starting rotation, it's safe to say that the 23-year-old rookie is well on his way to being just that.