Some interesting umpiring, a steal home, no hit batsmen by Diamondbacks pitchers...

It was a weird one in Phoenix on Friday. But, a couple of things that happen consistently -- a home run for Miguel Montero against the Rockies and a Colorado loss -- ensured balance remained on this wonderful planet in Arizona's 5-3 win at Chase Field.

Reverse chronological order seems to be the most effective way to recap this game, so I'll take that approach. The Rockies scored a pair of runs in the ninth and seemed primed to possibly add one more after Drew Stubbs moved DJ LeMahieu into scoring position with a two-out single. Charlie Blackmon was at the plate and had just fouled off a couple of pitches from D-Backs closer Addison Reed before working the count full ... or not: 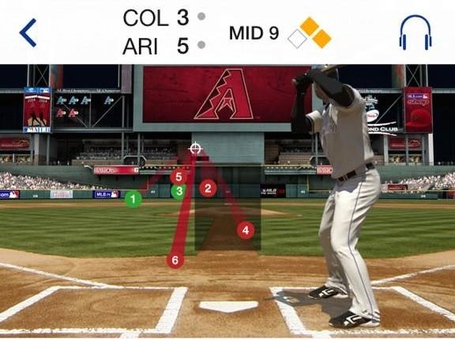 Dot No. 6 is home plate umpire Manny Gonzalez's called strike three to end the game. It was a horrible call in that situation, but it also served as a way of balancing an equally horrendous call -- one that benefited the Rockies -- earlier in the contest. We'll get to that in a minute.

Though it fell short, Colorado's late rally meant that the Diamondbacks' two-run seventh was the deciding factor. David Peralta, who tripled to plate Ender Inciarte for Arizona's fourth run, caught the Rockies' battery -- and probably also third baseman Nolan Arenado -- napping on an 0-2 pitch to Jordan Pacheco with two outs in the inning. Michael McKenry successfully received Rex Brothers' offering but took his time getting the ball back to the mound. While Brothers was bobbling McKenry's floater, Peralta slid across home for the ultimate stolen base, and ... well ... that's just pretty Rockies.

The inning did no favors for Tyler Matzek, who got through five innings having allowed only three runs with a little help from the umpires, as was mentioned above:

As you know, Jordan Pacheco spent the first seven years of his professional career in the Rockies organization, so it's no wonder that he was the victim of a play like that. Takes a while to wash off that stank. The double play allowed Matzek to escape a tough jam in the fifth, but the damage he gave up in the first was still enough for the D-Backs to own a two-run lead when the unfortunate call happened. That's because Miguel Montero, who has spent a good chunk of his life making the Rockies miserable, hit a three-run homer in the first inning off of Matzek on -- SURPRISE! -- a pitch near the bottom of the strike zone, giving Arizona an early advantage.

McKenry, despite his gaffe on Peralta's steal home, was one of the better players for the Rockies, going 2-for-4 with a fifth-inning home run. Justin Morneau and Corey Dickerson added two hits apiece and Brandon Barnes came through with his league-leading 14th pinch hit of the season, a one-out triple in the ninth that served as the catalyst for the Rockies' rally attempt.

Matzek finished with five walks in five innings. He struck out two and allowed three runs on four hits.