Here's what some of our community members had to say about the move the Rockies made earlier this week.

The last time Jorge De La Rosa signed a contract to stay with the Rockies in November of 2010, it was overshadowed by the euphoric news of Troy Tulowitzki agreeing to stay in Colorado through at least the 2020 season. This time however, it was the front and center story around Purple Row, and there was no shortage of good takes.

From our own Jordan Freemyer:

Given this is the same AAV the O's gave Ubaldo, I'm completely fine with this.

Holly96 was on the money with this short and sweet post:

He's a decent pitcher who wants to pitch in Colorado (and has a history of pitching well in Colorado) for a reasonable contract. That's the kind of gift horse this franchise can't afford to look in the mouth, IMO.

There was also this interesting observation from jrockies:

This might be the strangest contract in baseball today because of how simple it is.

Here's Tomcat009's response to this fangraphs article form July which didn't like the idea of a potential extension:

JDLR is either the second best or third best SP in franchise history. All he's done since that article posted is make 10 starts and go 64IP 3.52ERA 49K 15BB. That author ignores the the fact the JDLR is among the rare pitchers who can mentally deal with pitching here, that author is making his assumption in the vacuum that we could sign just about any league average starter and expect them to be league average which just isn't true.

Jorge has a 110ERA+ since 2009 here and has increased velocity each of the last two years, if you think you can find that guy for less than 12.5m on the FA market then I want some of what you are having.

As for why he would resign here below market I can think of several, not the least of which it is reported that he took about 3m less to sign here than Pittsburgh offered him in FA.

Hip hip Jorge on this deal.

This is the best thing to come out of what has otherwise been a horrendous season. DLR is one of the few reliable pitchers we have. He has proven his ability to win at home and on the road. His contract is short and affordable. Even if it doen't work-out and he gets injured, it's only a two year deal...

For an organization whose number one problem is reliable pitching, resigning DLR was a must if they are seriously going to compete over the next few years.

One way I look at the success of JDLR in Coors is this.

As stated above, he has been with us since 2008, that is exactly what these pitchers need. TIME! You cant expect to be a pitcher in Coors with huge success. It takes time to develop into a Coors pitcher.

Look at Jimenez, he got his 1st cup of coffee in 2007, and by 2010, he was one of the most dominant pitchers in baseball, including Coors. Aaron Cook, he was part of the team for quite awhile before he achieved success in Coors. Jeff Francis, with the team awhile, success in Coors. Belisle, he has been with the team for awhile and prior to last year and this year, he was pretty good. Jason Marquis? Ok, granted, he wasn't a Rockies pitcher to start BUT he was just a good pitcher when he came in and figured it out. I believe that pitching in Coors is totally mental. Once it gets into someone's head that it's not for pitchers, they will not do well. If the pitcher can come in, not let the ballpark get into his head, they will do fine.

However, the counterpoint can be this: Clayton Kershaw does not pitch well in Coors. He's one, if not the best, pitcher in the game. Now, I'm no mind reader but I do wonder if Coors gets into his head? But, if he was a Rockies player and given enough time to play there. He could do what he does best, dominate the opponet.

I'm very happy to see DLR get this extension, he has worked hard at getting it and he has been with this team through thick and thin.

JDLR deserves to get paid. Good for him.

He worked his [rear end] off both physically and mentally to get as good as he's become. He's a true professional who overcame his emotional hurdles and then TJ surgery and he just keeps winning. If more guys on this team had his outlook and work ethic we'd be in a very different place.

Overall, the community loved the deal, with 99% of us describing our reactions to it as either somewhat or very happy. It's sort of amusing actually how in a year where so many are so down on both the front office and ownership, you get a significant move that's almost universally approved by the fan base. 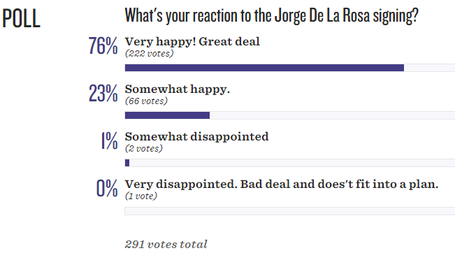