Colorado begins its 2015 season in Milwaukee and plays interleague series against all five AL West teams.

The Colorado Rockies on Monday announced their 2015 schedule, which begins with a three-game set on the road against the Milwaukee Brewers to begin the season.

The Rockies kick off their regular season on Monday, April 6 at Miller Park in Milwaukee. It will mark the third time the Rockies have opened a season there. Colorado dropped two out of three to the Brewers to begin the 2010 season and won two of three at Miller Park to start 2013.

Colorado will open its home slate against the Chicago Cubs on Friday, April 10 at 2:10 p.m. MT in a series that will continue through the weekend. Tickets to Opening Day are usually hard to come by, and a series against a promising Cubs squad will only compound that issue, so it would be in Rockies fans' best interests to land tickets as early as possible.

After the series against the Brewers and Cubs, Colorado will play 25 consecutive games against NL West opponents.

The Rockies' entire 2015 interleague slate is made up of American League West teams. The first series is a two-game set on the road against the Los Angeles Angels beginning on May 12. The Rockies will also have road series against the Houston Astros, Oakland Athletics and Seattle Mariners and will host all five AL West squads, including the previously unmentioned Texas Rangers, at Coors Field.

Below is the full schedule. You can also download and print a copy, courtesy of the Rockies' PR folks, by clicking here. 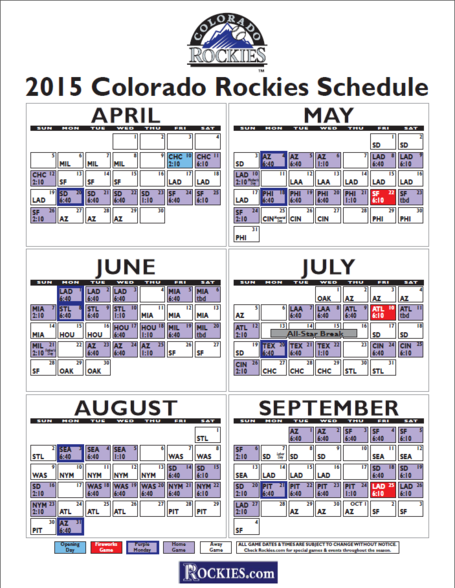