(Note: If you're well-versed in the 'Nolan Arenado: MVP?' and 'Park-Adjusted Stats' debates, you can skip this part.)

Nolan Arenado is having an amazing season. He leads the NL in HR (tied with Bryce Harper at 42) and leads the majors with 130 RBI. This is his second-consecutive good-to-great season offensively. On top of that, he's the best defensive third baseman (at least) in the NL, where he has taken both Gold Gloves for his two seasons, with a likely third arriving shortly. It's no surprise that many people in the Rockies' camp see him as a serious MVP contender.

All of that considered, it comes as a bit of shock that he has 'just' 4.5 fWAR/5.7bWAR (16th and 9th in the NL, respectively). Much of his 'WAR deficit' comes from having a 119 wRC+/123 OPS+ batting line*. While still very good numbers, they are not typical for an MVP candidate.

Coors Field has an unmistakable reputation as the most hitter-friendly park in MLB. So, it's not surprising that the park-adjustment for wRC+/OPS+ penalizes Rockies hitters (including Arenado) pretty heavily. However, it's been suggested that perhaps the park-factors are over-correcting for Coors Field. Why? The theory is that Rockies players, when hitting on the road, have to make major swing adjustments due to the difference in pitch movement between high-altitude Coors Field and more sea-level parks.

As far as the difference in pitch movement goes, the evidence is pretty clear: pitches move less at altitude than at sea level. So, it's plausible that Rockies hitters are at a disadvantage when hitting on the road. This is the Inverse Coors Effect. If you want to read more, here's an article by our own Matt Gross, and here's one by Jeff Sullivan of Fangraphs.

All of this has cast doubt upon using park-adjusted stats to evaluate Rockies players. If they're not accounting for the Inverse Coors Effect, how can they be accurate?

This leads me to my question: How can we tell if wRC+ is right or wrong?

How can we tell if wRC+ is right or wrong?

This is really hard. So many variables are in play, and I'm not exactly a numbers magician. But, I decided, after prompting from Drew Creasman, to investigate anyway. Here's what I thought:

If the Inverse Coors Effect exists and invalidates wRC+, we would expect that the same hitter would have a better wRC+ playing for non-COL teams than playing for the Rockies. Or:

This seems to make sense. If park-factors are over-correcting for Coors Field, then the same player would have a different wRC+ depending on where he played.

Here's the rub: we can't just create the Platonic Baseball Player, clone him 29 times, have them play 100+ seasons for every team, and then compare the wRC+ values. We have to work with the data we already have.

So, I made a big table using Fangraphs Custom Leaderboards with every player-season from 2002 (installation of the Humidor) through the present, with a minimum of 300 plate-appearances. Then, using a few Python scripts I wrote: 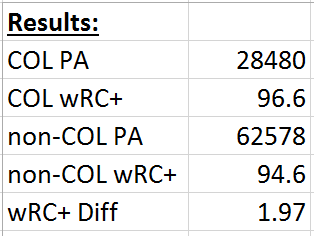 This is a link to a Google Sheet with the final output table. And here are the Python scripts I used: .txt and .py.

On average, the 31 players in the sample posted a wRC+ 1.97 points worse outside of Colorado. This contradicts our hypothesis that non-COL wRC+ would be higher than COL wRC+. So, that doesn't exactly support the idea that wRC+ is 'wrong' or that park-adjustments are unfair. But let's not stop there!

Digging deeper: Carlos Gonzalez posted the largest pro-COL split, with a wRC+ 61 points higher during his time in Colorado. That's not really a surprise: he struggled in the majors before playing for the Rockies. Juan Uribe had the largest negative split, hitting 40 points worse in Colorado compared to his non-Rockies seasons.

The big limitations on drawing conclusions here are these: The standard deviation of differences was around 18, so there's a really wide spread on outcomes. Also, there were only 31 players to compare, not a huge sample size (although there were 91,058 plate appearances in the sample, which isn't small). Furthermore, I didn't take into account age/when they played for the Rockies/etc. It's possible, that in this sample, they spent peak seasons in Colorado and non-peak seasons away from it.

All told though, I do believe this provides some evidence against the idea that park-adjustments over-correct for Coors Field. It's not definitive, but this simple analysis failed to uncover evidence to the contrary.

Regardless of what your personal opinion is, I hope that you take this little piece of data into account when talking about the use of park-adjusted stats. Honestly, Coors Field is exactly why we need park adjustments, so I am very pro-use for them. But I totally understand why lots of really smart, cool, attentive fans remain skeptical.

What are your thoughts?

*(As many are aware, wRC+/OPS+ attempt to capture a player's total performance at the plate, adjusted for how hitter friendly/pitcher friendly the player's home park is. These stats are indexed so that 100 = league average, and points above/below correspond to percentage-points above or below league average.)