The Colorado Rockies have a lot of talent in their minor league system. The organization is perhaps as deep as it has ever been in terms of skill but also in terms of character and unity. Is their closeness a part of their success?

At the Colorado Rockies spring training facility -- Salt River Fields at Talking Stick in Scottsdale, Arizona -- there are signs of both the figurative and literal variety almost everywhere you look. There is a sign that reminds you that is the first professional spring training baseball diamond in the nation built on Native American tribal land. There are signs typical of spring training: imminent hope, dreams swirling in the dust, moments of brief rest, and the joyful agony of hard work lurking around every corner.

As I wander around the back fields on the first day of minor league competition, it becomes palpable that for a special group of young players giving Rockies fans every reason to be hopeful for the future, these are their hopes and dreams, their hard work -- their joys and agonies.

And tucked into the Rockies side of the magnificent complex, flanking the youngest of young men in the system, there are signs paying tribute to -- immortalizing really -- the late, much beloved and missed team president, Keli McGregor.

One of them reads:

"No matter what your role or title, model greatness and invite others on the journey." - Keli McGregor

The ballplayers that comprised last year's South Atlantic League Champion Asheville Tourists -- most of whom are expected to be in Modesto in 2015 -- embody that principle in their bones, to a man.

Their most advanced star, outfielder David Dahl, saw time at High-A Modesto last season and returning to Asheville to make a championship run was like coming home to a second family that insists upon modeling greatness, and more importantly, inviting each other along the journey.

The day before re-joining his teammates from that unforgettable season, Dahl recorded a hit in MLB camp and while he and I did post-game analysis on the progressions in his game and the brightness of the future, we couldn't help but reminisce.

I mention how exciting and somewhat surreal it was to see him stand on a major league ball-field with Ryan McMahon and Jordan Patterson. "And Dillon [Thomas], too," says Dahl, immediately concerned that someone deserving might be slighted -- simultaneously and unintentionally highlighting my tendency to prioritize our own PuRPS list players that tend to get more (digital) ink.

To Dahl and the 2014 Tourists of Asheville -- who would receive their championship rings the day after I left Scottsdale -- there are no such divisions.

"Yeah, we're all really close. We hang out outside of the field or with each other at the field. We joke around, but we know when to get serious. It's cool going up there and playing with them too because hopefully we can all keep moving up through the ranks and one day help the team win."

"Team" and "win" are common words in discussions both between, and about, all of these guys.

"It was just cool to be out there," says McMahon, "This is what we're working for. And to do it together means a lot."

McMahon is the type of dude who remembers your name even when you haven't seen each other in a year and even that was only for about five minutes of conversation.

McMahon is also the type of dude who leads the South Atlantic league in RBI, was second in doubles, and was sixth in home runs in 2014, meaning that the only better power hitter in the league may have been his teammate Correlle Prime who was second, first, and third in those categories, respectively.

Both sluggers are people who have that magical ability to make everyone around them feel awesome and welcome.

As the first minor league game of the season was about to kick off on the Salt River back fields, I heard a voice from inside the dugout as I passed by: "Hey, Purple Row is here! It's time to get serious! ... What's up, Drew?" 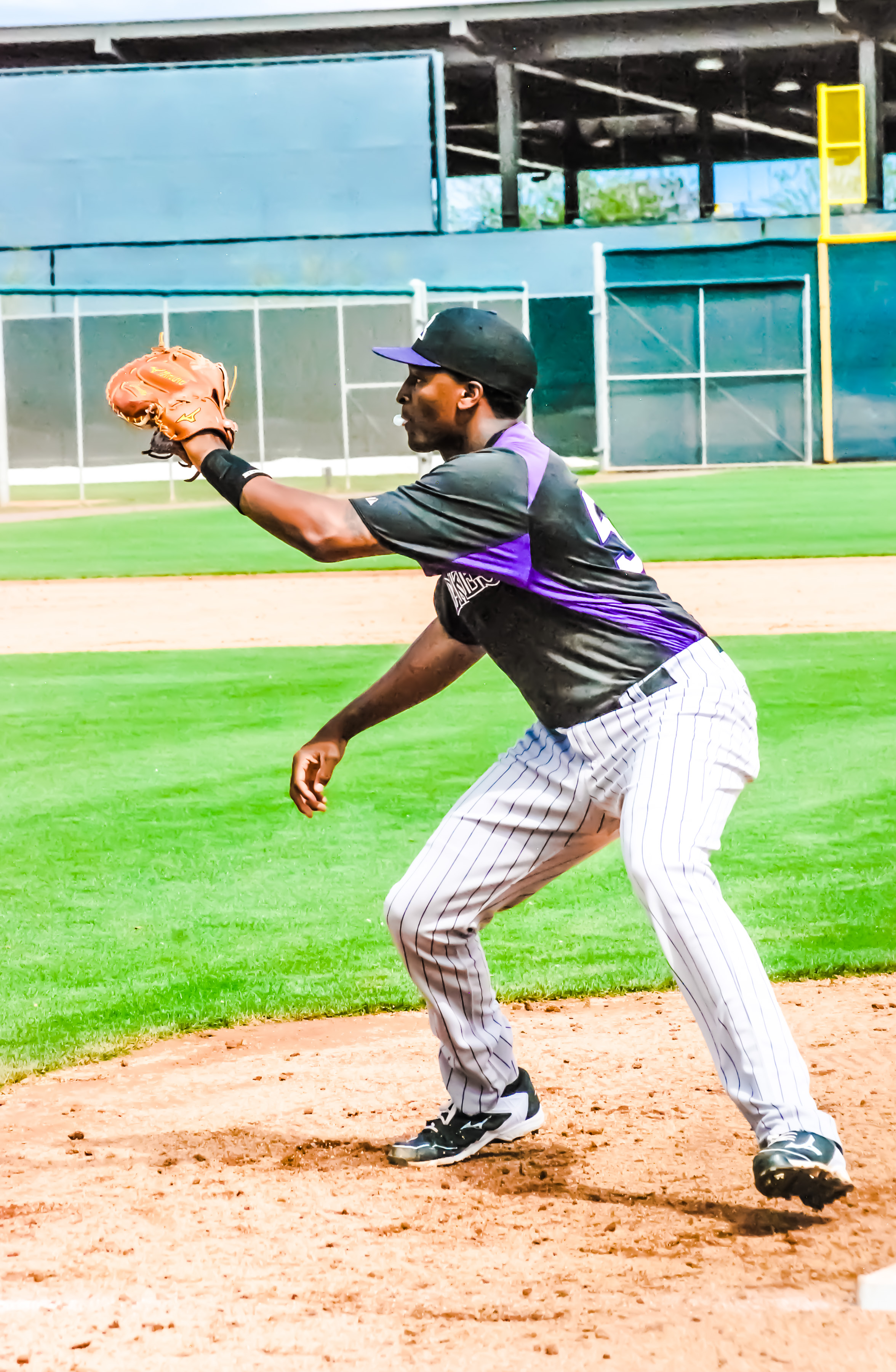 It was Optimus Prime whose ensuing handshake reminded me that he is no small man and whose ensuing smile and hearty conversation reminded be he has no small heart: a common trait among this bunch.

"Man, last year it was easy coming to the ballpark every day," he says. "We've got a great group of guys in that Asheville clubhouse."

We talked about the obvious names -- Dahl, McMahon, Patterson -- and again I was reminded that there is much more to a team than the guys us talking heads want to gab about all day. "[Michael] Benjamin, too," Prime interjects, "The list goes on and on. What really made the season awesome was the role guys. The guys coming off the bench played great all season; the Ashley Greater's and Zach Osborn's, Wilfredo [Rodriguez] getting in there with the bat, Emerson [Jimenez] too when he came up ... it was just the icing on the cake."

Teamness (to steal a word from George Karl) and friendship don't draw lines from the box score.

"To see those guys sit out for three or four games and come in and play like it was no problem," Prime continues, "We never heard them talk any flack from the dugout. They're cheering, they're the first guys out of the dugout on a home run ... that made the season just that much more special."

But am I projecting a bit too much onto these still very young players? In my head, the ideal baseball team is just the kids from The Sandlot all grown up. And that is how this squad feels. But anyone who follows the minors closely is also acutely aware that each man is on an individual mission and sticking together can often take a back seat (and reasonably so) to pushing one's own career forward. Getting called up is the number one priority for all of these guys until there are no further levels to be called up to.

And yet, "We think and talk about [staying together as a group] all the time," recalls Prime, "And I would like to guess that's what the plan is -- to keep us together as long as they can. I've been with these guys ever since day one. We're real close off the field: we room together; every year everywhere we go, we're always together; you never see us not with each other. It's fun, man, and I love it, so yeah, I hope they keep us all together."

I didn't get much time to catch up with Jordan Patterson this trip, though in a brief encounter he echoed the statements of each player I talked to and assuredly many more that I did not.

But I was reminded that probably my favorite story since coming to write for Purple Row comes from the first time I went back to Grand Junction after my first series of "DC in GJ" articles were published. I ran into Patterson as he was heading out to the field and he thanked me for what I had written and told me he sent it along to his parents.

Ever-present selflessness permeates the back fields in such capacity that if you could bottle it, you could power the entirety of the greater Phoenix area.

"With team success comes individual accolades," says Prime, "I'll hit cleanup, I'll hit in the 9-hole, as long as I'm in the lineup and playing with my boys."

I stood in the MLB clubhouse with Jon Gray moments after the only outing of spring where he gave up some runs, and in the middle of our conversation our eyes both gravitated to the television screen behind us which was showing the game he had just departed from.

Raimel Tapia had come up to bat. 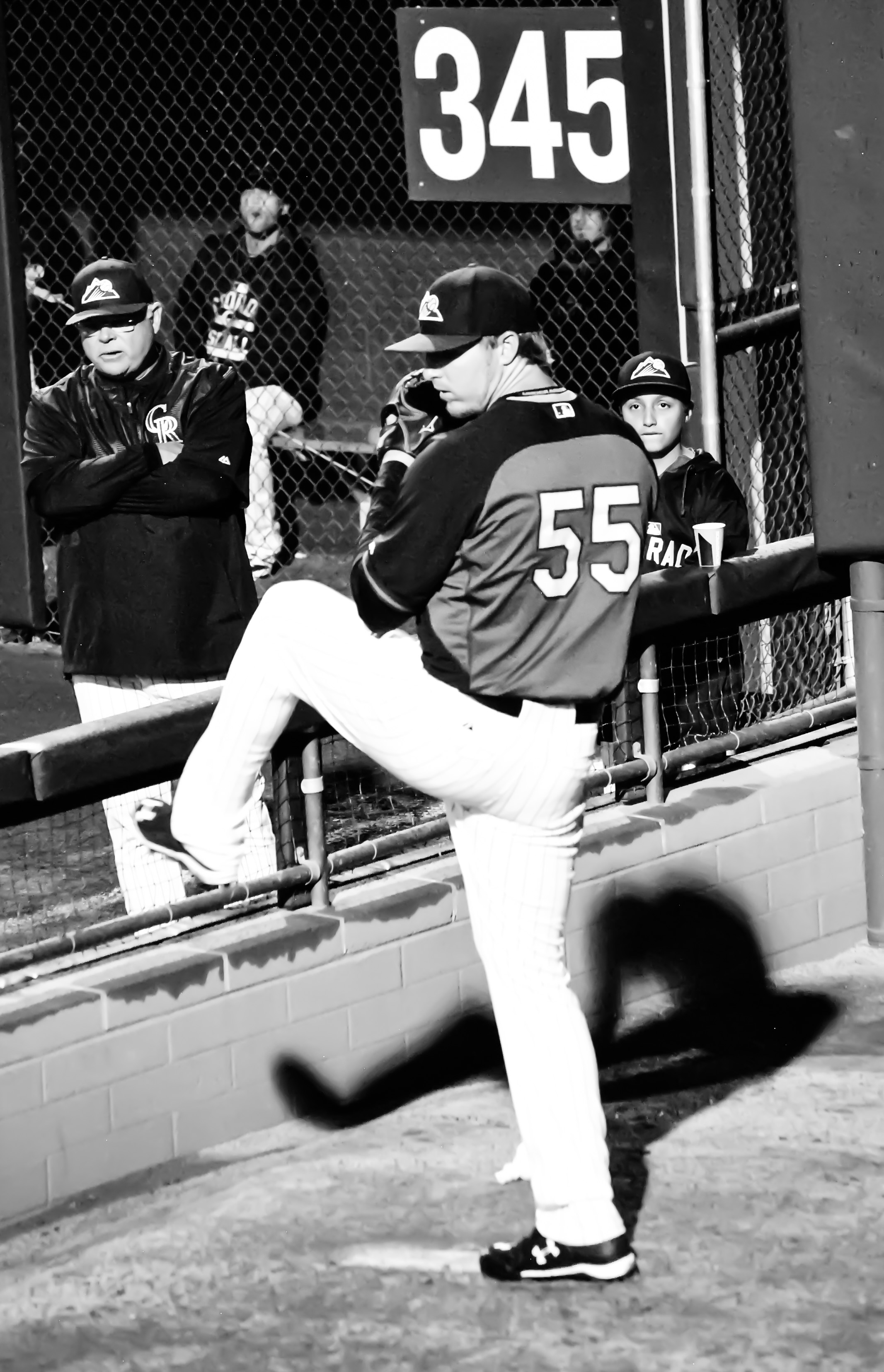 "Don't want to miss this," says Gray. "I don't know how he does it (Jon then attempts to copy Tapia's now famous, unique batting stance) but he is just one of those guys you have to see for yourself. I love watching this dude hit."

Even players who were only with the core for a brief time remain inextricably linked to each other; the indelible marks of an inseparable team show through in the slightest mention of one of its members.

We look on as Raimel Tapia appears more determined to prove himself than anyone in camp. Expertly hiding his trademark smile, Tapia was firmly in work-mode and although there wasn't a translator around for me to confirm it, he has always spoken with his bat and his bat says "Try leaving me out of the Top 100 prospects ... One. More. Time."

He rarely swings and misses, even against the big boys, and with each swing he aims to prove that he is more than a novelty act, an odd stance, or an exuberant personality. Raimel Tapia is just a damn fine baseball player.

He believes (and so do I) that he is every bit as good as Dahl or McMahon. It is that friendly competition (emphasis on friendly) that keeps all of them happy to see each other every day while also providing that perpetual drive to get better in order outplay one another for the good of the team.

Love him or hate him, this is what Dan O'Dowd meant when he used the term "human analytics;" the former GM should be given massive credit for assembling this cast of characters. Moving forward, a more important point was made on the most recent Purple Dinosaur Podcast by Tyler Maun and Anthony Masterson; Jeff Bridich has also been in integral member of this family for several years and his promotion is a welcome sight to the players who know him the best.

The family is still intact.

We can look at numbers all day (lord knows we love them) but each of these guys is a unique and beautiful snowflake. Or something like that. They are human beings and just like every one of us, their job performance can be affected by their life circumstances. And right now, being a member of this family and this organization means life is good.

But is their closeness related to their phenomenal growth into the pillars of the deepest farm system in team history? I'll let a man much wiser than me answer that.

"Relationships are the key to long-term sustainable success." -Keli McGregor

Most of these players will move to Modesto together, a few will remain in Asheville and get to extend the family even further to guys like Kevin Padlo, Forrest Wall, and Dom Nunez, before eventually catching up.

One thing is for certain, though, in speaking with any of them but perhaps summed up best by pitcher Zach Jemiola: "These are life-long bonds, life-long friendships. I love all those guys."

Fans of the Modesto Nuts had about as rough a season as fans can have in 2014. But they should be in for a real treat in 2015 when David Dahl, Raimel Tapia, Ryan McMahon, Jordan Patterson, Correlle Prime, and many (many!) others come to town with visions of another championship dancing in their heads.