Now that spring training is almost in the books, how do you feel about the job Bridich has done thus far?

The Colorado Rockies' Opening Day roster is beginning to take shape. With that has come many surprises, both good and bad.

Jorge De La Rosa, David Hale and Eddie Butler have dealt with injuries that have forced Rockies general manager Jeff Bridich and his staff (including manager Walt Weiss) to get creative with how the roster is being built. Bridich has, so far anyway, resisted the urge to add top prospect Jon Gray to the roster, though there's still time for that blunder to happen. 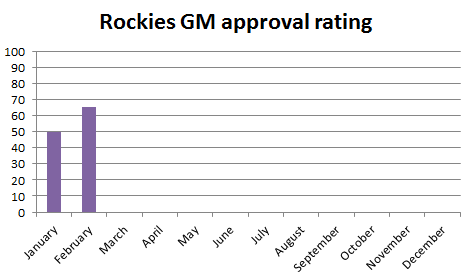 The Rockies recently decided to option unproductive 2014 stalwarts Brandon Barnes, Rex Brothers and Charlie Culberson to Triple-A in a slew of moves that caught most followers of the team surprised. Not because the moves were bad, but because they're the type that the club has been hesitant at best -- and unwilling at worst -- to make in the past.

Before you vote, here's a look at the team's projected (by me, at least) 25-man roster. Perhaps that will help sway your decision one way or the other if you're on the fence:

Vote below, and in the comments, be sure explain why you voted the way you did, as well as if there's anything Bridich can do (promote Gray?) between now and Sunday to change your mind either way.