MLB Opening Day 2015: Hope springs eternal! A whimsical look at the best day of the year

April 10 is rapidly approaching. It can't get here soon enough.

Share All sharing options for: MLB Opening Day 2015: Hope springs eternal! A whimsical look at the best day of the year

Now that we've whet our appetites with baseball that doesn't count, it’s time to turn our attention to what really matters, possibly the only game that matters, Opening Day! The league thinks that Colorado is a frigid wonderland covered in mountains of snow in April, so of course the Rockies start on the road, in that warm-weather bastion, Milwaukee, Wisc. (I’m cheating; Miller park is domed). Of course, the home opener is April 10 against the Cubs, a rather disheartening opponent. Whose idea was that? Typically the Rockies sell out four non-July 4 games a year: Opening Day and the Cubs. So let’s whittle that down to only three days in 2015!

The Cubs ... sheesh. I’m so sick of hearing about how the Cubs are winning the World Series this year because Marty McFly says so. Nevertheless, this madness is catching on, and because they have Lesta’ and a century’s worth of prospects, the Cubs are peaking as preseason darlings. Fortunately, the Nationals have already won the World Series on paper, so maybe we don’t need an Opening Day. Regardless, the Cubs as the opening series is the worst scheduling idea since Todd’s last game against the Baseball Team from Massachusetts a few years ago. Shame on you, MLB.

Scheduling aside, Opening Day is the best day of the flippin' year – not just the baseball year, but the flippin' year period. Give me Opening Day over freezing Christmas! The fact that it is NOT a national holiday is something that should keep Congress up at night, and should be floated around the Supreme Court every term. Seriously, Opening Day is the best!  If you've never been, let this piece serve as a guide, and if you've never missed it, nod your head in agreement as we preview the bestest, bestiest day of the year!

I had a dream once that the Rockies opened the season at home, but then realized it was just a dream. I'd like to say that on Opening Day the Rockies are tied for first, but they seem to always start out on the road, where their all-time record is unmatched! Snark aside, when the Rockies take the field at Coors, the most they can be is 3 games out.  Lately that counts as optimism. If they manage to win the series in Milwaukee, they could come back in first place as intra-division opponents will beat up on each other. Coming home to Coors 2-1 means we've got ‘em right where we want ‘em!

If you've never been to LoDo on Opening Day, you are probably in the extreme minority; everybody and their mother is downtown (I know mine will be) at the jovial party that goes on for blocks. Giveaways, live music, free food and swag – all these are available at every street corner. Guys that walk around with velcroed-on turkey jerky are everywhere, and free t-shirts seem to fly down like confetti. The smell of hot dogs, brats and burgers surrounds the party. Anyone who is anyone is there! "Oh wait but I have work that day," you may be saying.  But did you forget: national holiday! Take your floating day, call in sick, or just tell the truth – "I’m going Downtown to Opening Day!" – and your boss will understand.  If they don’t, quit your job! Not once would you regret that decision, because Opening Day is that cool. 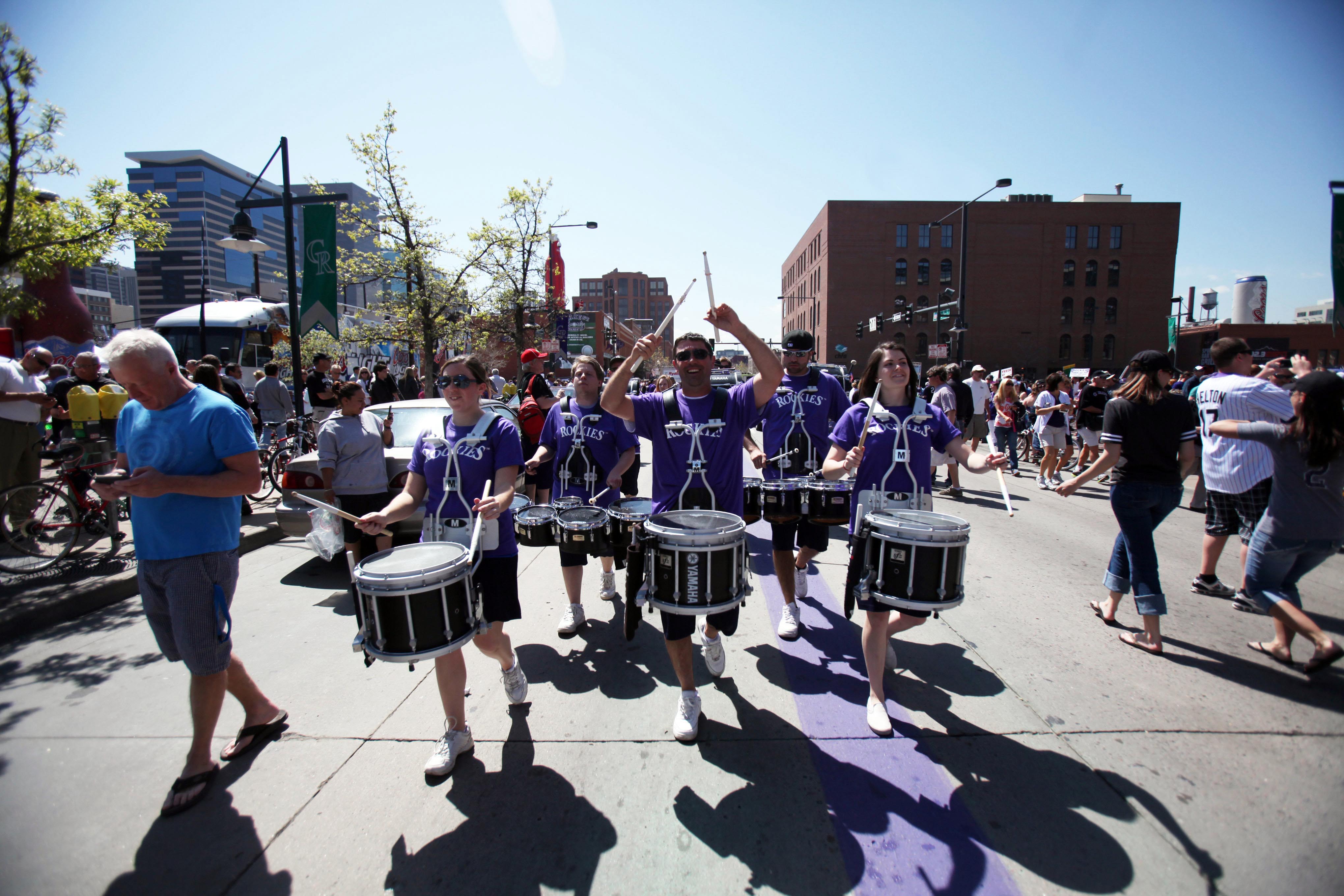 The party goes all day, starting early in the morning when people get in line for Rockpile tickets for the sold-out game. Therein lies the best part: you don’t even need tickets to the game to make Opening Day epic. I know tons of people who get dressed up in their dormant Rockies gear, head downtown, participate in the festivities then either go watch the game at one of LoDo's many establishments or go home. Indeed, by the time the game starts, it’s almost an afterthought – that is, until the Air Force jets fly by (US Military budget dependent). Then, there is the huge U.S. flag unveiled across the outfield as the fireworks go off and approximately 108 balloons (one for every Rockies win this year, including playoffs) are released into the air. Don’t forget to go early and take it all in -- and get your magnetic schedule to prove you were there, as well as to see when the less meaningful games occur.

Get a dog! Or get a Denver Cheesesteak – they always taste better after a six-month wait – but, either way, go early or you’ll have to wait in a capacity-crowd line. Of course, you may not be hungry after eating your way through LoDo. It’s not uncommon to get the aforementioned jerky, snow cones, hot dogs, peanuts, and even burgers for -- wait for it -- FREE from the vendors and promotions staffs outside the ballpark!  Last year we got foot-long spicy sausages just by following the over-sized wiener mascot to his perch at 22nd and Blake.

Once the game starts, it gets even better, historically. The Rockies have an all-time record of 13-9 on Coors Field Opening Day, so there’s a good chance they’ll win. Last year Charlie Blackmon single-handedly destroyed the Diamondbacks, going 6-for-6.

The feeling during the introductions of the starting lineup when the place goes bananas is unforgettable. While you're taking that in, don't forget look out toward right-center field and see the retired No. 17. That feeling might get even better.

Every hit, every play, and every (gasp!) home run is amplified times 50,000 on Opening Day. There are no empty seats to be seen. The sun is shining (oh please, oh please be shining), the bunting (not the rally-killing kind but the ornamentation) is hung by the dugout with care. The painted Opening Day logo on the field -- and for the first time, on the game balls (so bring your mitts) -- conjures the optimism of hope.

This is our year.

A quick 1-2-3 inning in the top of the first will sustain the momentum, and as the Rockies get on the board first via a Troy Tulowitzki moonshot or a Carlos Gonzalez laser, the comfort of the beautiful game will sink in. As the game moves on (regardless of the score), you begin to feel a familiar peace. The crowd may simmer down and you can converse with your friends and family and remember why you love this game. You’ll tell stories of when you were at Mile High in 1993, or Coors in 1995 (in nostalgia numbers, Coors held an astonishing 138,000 people that first day, according to the stories of those "who were there"). 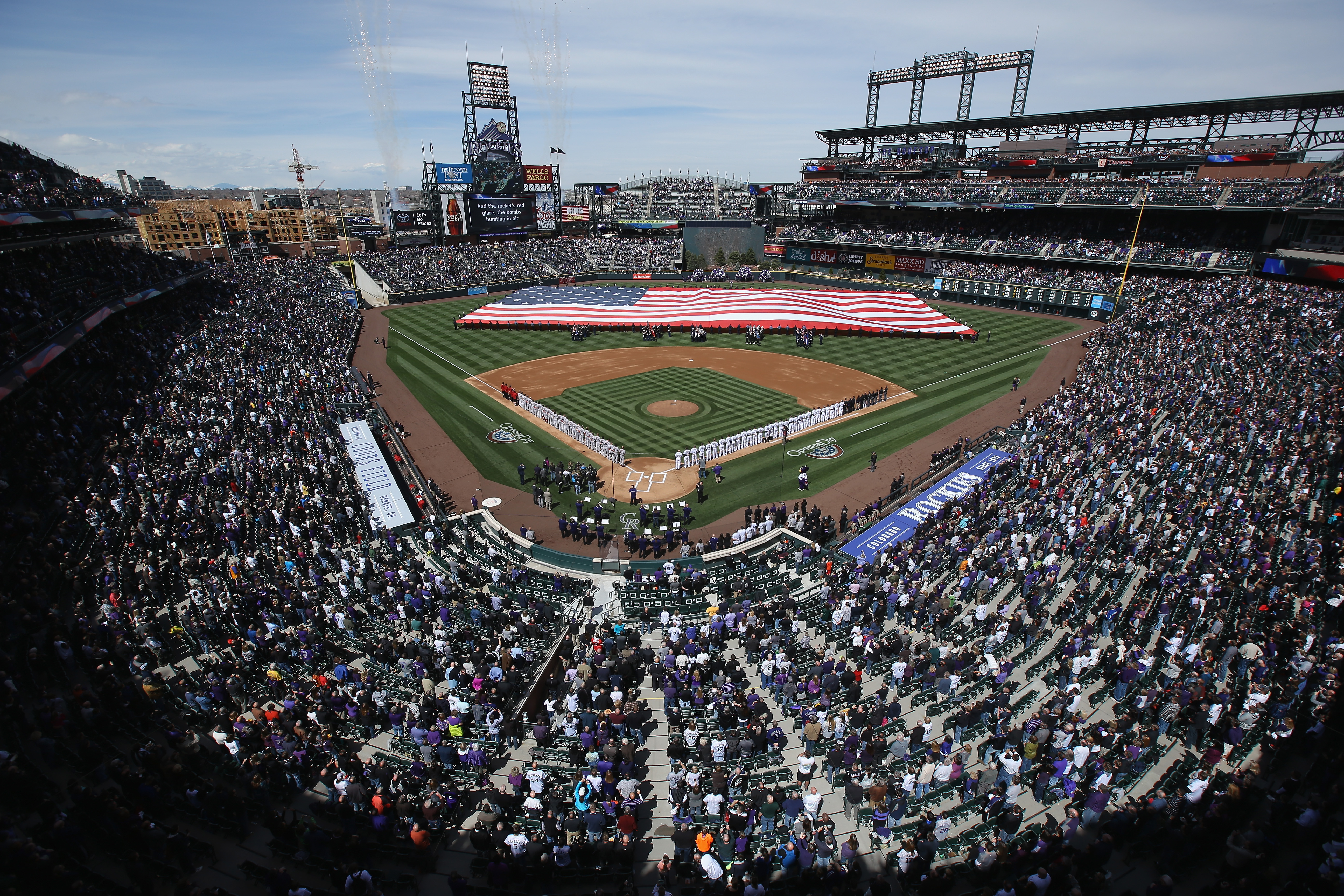 As you approach six hours in, you’ll let off on the adrenaline and just let the game wash over you. You’ll like sitting at Coors -- no, you’ll love it. You’ll realize that Jorge De La Rosa is hurt and Jhoulys Chacin is gone, 2007 was a long time ago, the Cubs fans won’t shut up about Doc Brown, the Dodgers just pulled ahead, another pitcher just went on the DL ... then you’ll realize you don’t care; you’re watching Major League Baseball in one of only 15 cities to be doing so.

The Rockies may not be World Champions, but they are our non-World Champions!  So as we watch the other 80 games (plus the playoffs, naturally!), remember the real beautiful game.  Remember Opening Day 2015, because it'll be the best one yet.