Among the national prospect writers, Raimel Tapia is easily the Rockies prospect that generates the most disagreement. To wit, the 21-year-old lefty outfielder was placed as the No. 27 prospect in the game by Baseball Prospectus in their midseason top 50 update (second in Colorado's system) and given a 65 OFP by swing guru Ryan Parker, but he didn't even make the MLB.com top 100 on their midseason update, placing ninth in Colorado's system with a 50 OFP.

Tapia can straight up hit. First 7 I've ever put down on a hitter and I did so with confidence. He makes adjustments during at bats and during his own swings that are usually unseen at this level of minor league ball. Great instincts all around. Hopefully he can add some weight and strength to his frame. Could handle center easily. Top of the order hitter who could either be a table setter or clear the table himself. Special bat.

A terrific athlete, Tapia plays a high energy brand of game that in many ways makes him the most exciting player in the organization to watch. At the plate, he's all about making contact. He has a very handsy approach and has shown an ability to hit well with two strikes, getting low in his stance and continuing to put the ball in play with authority. As a result, he doesn't strike out a ton. Tapia has flashed some power, and there might be more to come, though he's more of a line-drive hitter now. A tick-above-average runner, his instincts and aggressiveness help him on the basepaths. He's also shown he can play all three outfield positions well.

Tapia's energy can get in the way at times, but he should learn how to keep it in check when necessary as he matures.

It's clear that the main difference between the way that prospects and scouts see Tapia is the hit tool. Tapia has one of the least orthodox swings in the business, but it's been effective enough to give him a .316 career minor league batting average.

Tapia has been successful with those mechanics ever since he was a highly regarded international signee ($175,000 bonus) for the Rockies back in 2010. After two years in the Dominican Summer League, Tapia made his way stateside in 2013, and all he did was win the Pioneer League Player of the Year award with a .357/.399/.562 (141 wRC+) line.

Tapia followed that torrid stateside debut up with a similar line in Low-A (134 wRC+), prompting his first preseason top 100 accolades (45th overall from BP). This year in Modesto against pitchers that are 1.6 years older on average, Tapia is again better than league average at the plate, with a .311/.340/.467 line (116 wRC+) and 46 extra base hits in 504 plate appearances. He also appeared on the World roster for this year's Futures Game, going 2-for-3 with the squad's only run in the game.

It should be noted that at Modesto, Tapia has the lowest walk rate (4.2 percent) and highest strikeout rate (17.2 percent) of his career, though on the positive side the lefty has a .953 OPS this year against left-handed pitching. Other than the rather hefty platoon split, Tapia is pretty consistent across the board:

Here's the bottom line: in his minor league career, Tapia has played in 428 games and he has 553 hits. The unique mechanics that have some prospects and evaluators cringing are also what has allowed Tapia to remain so remarkably consistent with the bat. His unusual exaggerated crouch, slap-hitting approach is very difficult to project but as of now it has allowed him to hit the ball with authority to all parts of the ballpark: 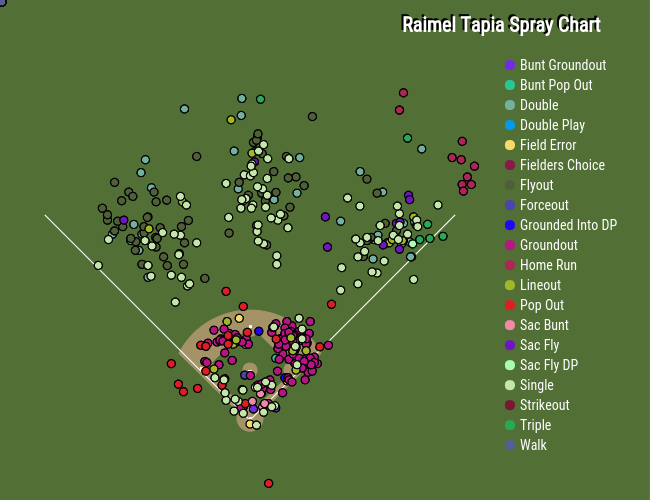 For those of you wondering, Tapia has maintained a pretty steady BABIP as well. It's down to .357 this year from the .380 range it was in Grand Junction and Asheville but the minor hits his average has taken have been made up for in 30 added points of isolated slugging from last season.

Wilson Karaman of Minor League Ball and Baseball Prospectus provided a detailed review of Tapia earlier this year (including an Alfonso Soriano comparison) and a more toned-down eyewitness report for BP than Ryan Parker had previously provided:

Tapia is young for the level and it shows in a multitude of rough edges to his game. The base-running and defense are both below-average at present, and while the raw tools suggest potential for improvement he hasn't shown it in either area in my looks. He can certainly hit, but the present approach is exceedingly aggressive, limiting the overall offensive profile and with it the OFP.

There's a ton of mental and physical projection remaining here and a high degree of variance in his potential outcomes. I can't forecast a ceiling of more than a good second-division regular, but you don't have to squint too hard to see an actualized version of Tapia where he eventually hones his approach, the hit tool carries the day, and he develops into a consistent first-division player in his peak years.

The thing that strikes me after reading these scouting reports, watching the video, and looking at the statistics is that there really are a wide range of potential outcomes with a player like Tapia. He could be a perennial All-Star and batting champion with center field utility or he could be a good contact hitter with low power and decent speed that profiles as more of a fourth outfielder (and a corner outfielder at that).

Or he could flame out entirely as many prospects do, I suppose, but I'd prefer not to think about that. Tapia is a potential five-tool player whose arsenal has some development yet to go to be major league ready.

Many (myself included) were caught off guard by Tapia's swift prospect rise and initially kept him lower on their ballots, waiting to see if he could replicate his numbers in full-season ball. Now that he has done so for multiple years, the electorate has him comfortably in the upper echelon of Rockies prospects (I placed him seventh myself). Tapia will get to prove himself next year in Double-A, wherein we'll continue to get a better idea of what kind of player he will be in the Show. A 40-man roster protection after the season is a virtual lock.