Is Jeff Bridich the worst for his deadline strategy? Is he moving the team in a new, exciting direction? Give us your thoughts.

We finally have our first real opportunity to judge the performance of Colorado Rockies general manager Jeff Bridich.

Reyes should do an admirable job of filling Tulo's shoes through the end of this season, but the Rockies figure to flip him this winter -- if not before. Meanwhile, the pitchers -- Jeff Hoffman, Miguel Castro and Jesus Tinoco -- will all likely figure into Colorado's future plans, albeit to varying degrees. Bridich needed to add quality, high-ceiling arms to his farm system, and he accomplished just that. Plus, that $50 million should come in handy when it comes time to try to extend Nolan Arenado and/or add complementary pieces to what could be a contending team a few years down the road.

On the flip side, the Rockies traded an elite player -- the best shortstop in the game -- for what essentially amounts to a bunch of question marks. It can also be argued that the Detroit Tigers got a similar prospect package for two months of David Price to what the Rockies received for five-plus years of Tulowitzki. 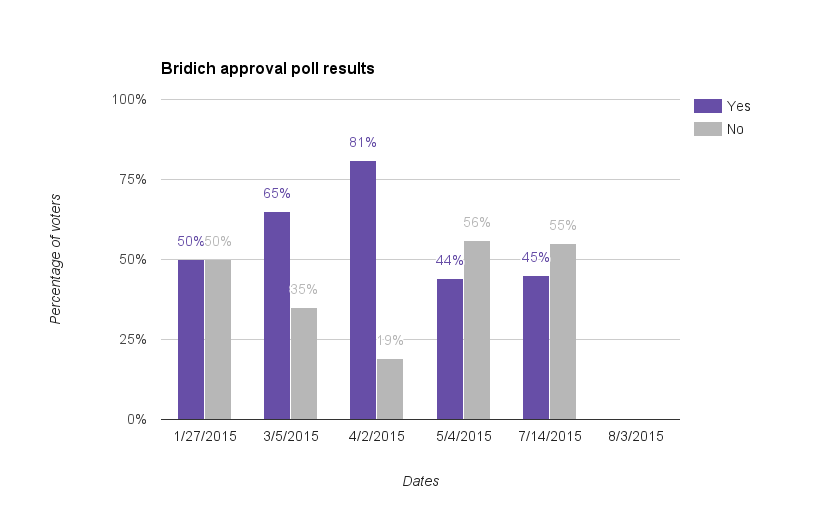 Then, there's the whole ordeal of the Rockies not bothering to make any other moves prior to the trade deadline. In the scope of a full rebuild, the Tulowitzki trade makes all the sense in the world. But with no other trades made or seemingly even in the works, it's really easy to question Bridich's philosophy behind dealing Tulowitzki right now, as opposed to waiting until the offseason or perhaps later.

That's not to say the Rockies can't try to pass Reyes, Carlos Gonzalez and the like through waivers in order to make a trade this month, but as things sit now, there are just as many -- if not more -- questions as there are answers.

So, taking all of that into account, do you approve of the job Bridich has done in his first 10 months as Colorado's GM? Vote in the poll below and explain yourself in the comments. And, as always, consider converting those long-winded comments into FanPosts. You can do that here (and read about how to do it here).