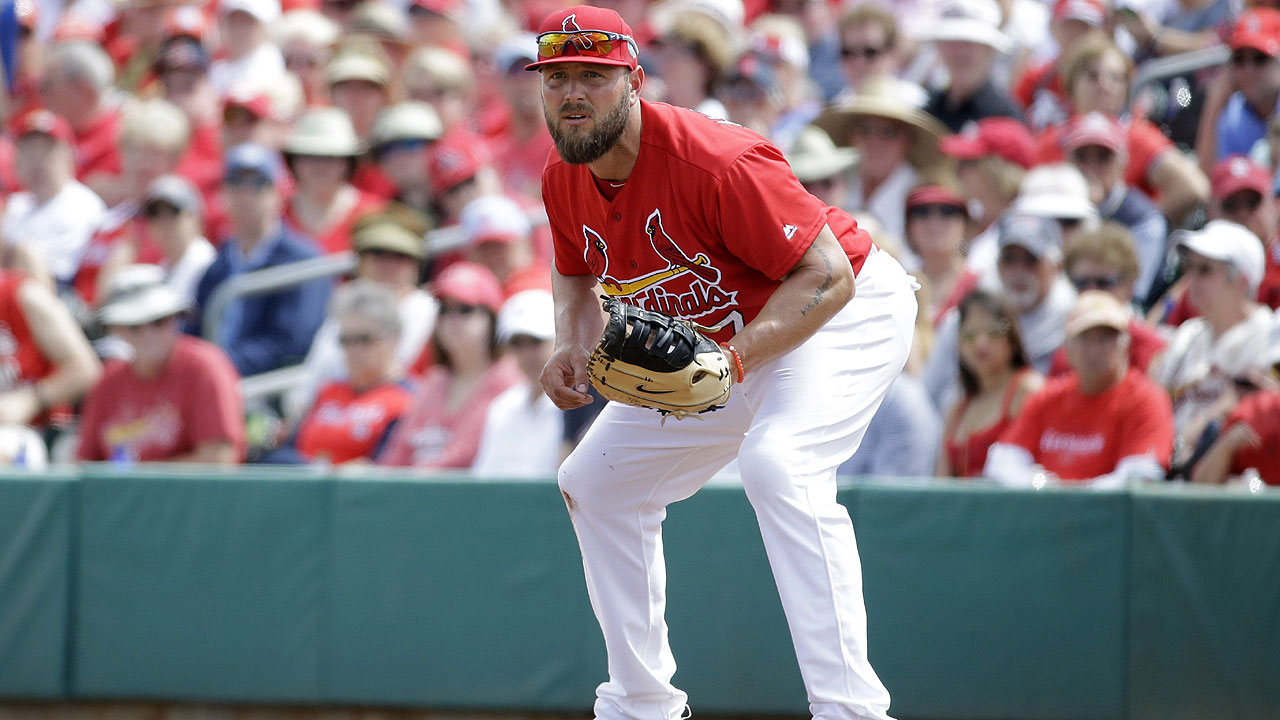 Matt Holliday still has some game in him. He knows it too, "I have a lot of good baseball left in me." Good baseball was on display last night as he homered (Holliday's Farewell to St. Louis) in his first plate appearance since August 12 after having suffered a broken thumb on a Mike Montgomery 94 mile per hour fastball to the hand (Holliday's Broken Thumb). The homer is special as it is likely the last homer Cardinals fans will see with Holliday donning the red bird uniform knowing that the Cardinals will not exercise Holliday's $17M club option for 2017. With the Cardinals said to be interested in improving their defense, that only leaves one position for Holliday - first base. It seems the Cardinals would have already negotiated some kind of deal for 2017 if they truly wanted Holliday back.
It would be a delight seeing Matt Holliday don the purple pinstripes playing first base next year. The reasoning has some nostalgia to it, but also a lot of logic behind it too. There are some good candidates to take over at first base for the Rockies in 2017. Mark Reynolds is not the worst option, but definitely leaves something to be desired. The first base market for the 2017 free agent class is probably one of its better offerings in the class. The list includes the likes of Edwin Encarnacion, Adam Lind, Mitch Moreland, Logan Morrison, Brandon Moss, Mike Napoli, Steve Pearce, Mark Trumbo, and now potentially - Matt Holliday.
The Row has talked a lot about who would be best to take over at first base in 2017. Many believe Mark Reynolds offers solid production for his low cost - true. Some believe that getting better production from first base would help propel the Rockies towards contention - true. Some believe now is the time to invest and go for contention knowing that a lot of money comes off the books after 2017 - true. Unfortunately, the Rockies may have to settle for Reynolds or a guy similar to him because the 2017 payroll is already looking maxed out. Jeff Bridich, master of under the radar trades, will need to flex his Harvard problem-solving skills to creatively reload a meek bullpen, create roster depth, and find a short-term solution at first base. 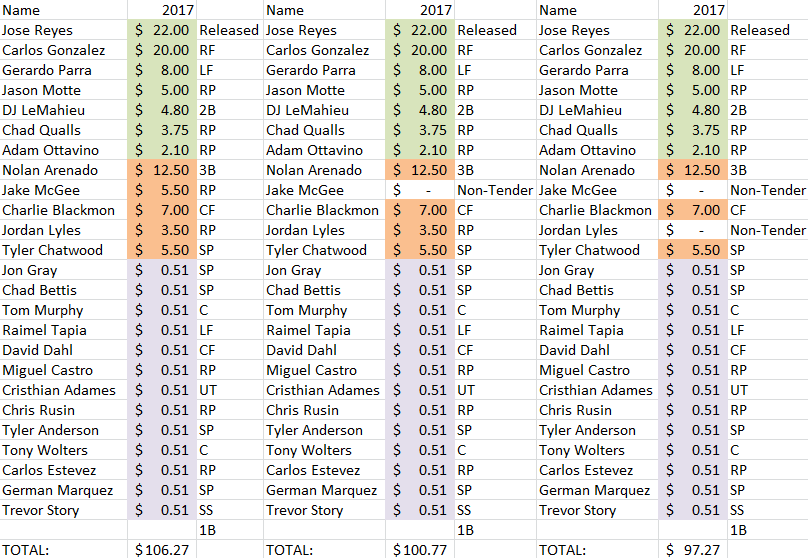 Looking at the above mentioned 2017 payroll figures becomes a little depressing. The Rockies set a payroll high this year hovering right around $108M. That should not be considered the new norm. Although, it should be an easier sell for Bridich to say he can construct this team around $100M, just not with Jose Reyes' sunk cost hovering over him in 2017. While this does not mean Monfort will let Bridich construct a team with Reyes' $22M not being a factor, it should mean Bridich has some flexibility. In the end, Bridich will probably have to construct the team for less than $110M in 2017. To investigate, Bridich probably has about $10M to spend on at minimum two relievers and a first basemen if he non-tenders Jake McGee and Jordan Lyles.
Where does Holliday fit with that? Well, he probably does not fit honestly. Holliday probably belongs in the same pay range as Mike Napoli does, which could price him out of Colorado. It would be a surprise to see Holliday receive a multi-year contract at his age and with his limited positional flexibility. Easiest way to satisfy Holliday's asking price and Monfort's desire for profit would be an incentive-laden contract. The logic goes with the belief that if Holliday performs closer to his career norms, the Rockies should be contending. Thus, if the Rockies are contending they should see a spike in attendance and hopefully playoff profits. Monfort sacrifices significant profits in 2017 by paying Holliday's incentives, but invests with the hope that playoffs in 2017 means a new era of Rockies baseball - a profitable one at that.
Why Holliday though? Why risk playing someone that has never played first base in his life over other comparable options? Well, because Holliday is a special talent that has been under-appreciated almost his whole career. He has been overshadowed with altitude gloom in Denver, and the man that got paid when Pujols' left. You sign Holliday because he is exactly what the Rockies need, right now at this place in time. He is the consummate clubhouse leader. He is the patient hitter that often alludes the Rockies' lineups. He is the balance to the lefty-laden lineup that faces the likes of Clayton Kershaw and Club Lefty in LA, Madison Bumgarner and Moore in SF, Ray in AZ, and well...Christian Friedrich in SD?
Many will say Holliday is not a first basemen - true. He has the skill and athleticism for it and already knows that he needs to make the transition though. This is the reason Holliday approached the Cardinals last off-season to express his desire in learning first base. "It's not left field, but I've been practicing quite a bit, so I feel comfortable," Holliday said. Holliday saw 38 innings at first base this past spring, in which he made no errors in 31 chances (three assists) and was a part of four double plays. Holliday said that the biggest challenge was just getting comfortable and being able to play instinctually instead of thinking of what his job was on every play. Holliday then received nine starts at first base during the regular season totaling 61.2 innings with no errors. Getting a full off-season to focus on first base would go a long way in helping Holliday's comfort. He's a large target and an athletic guy who should be able to make the transition to become a serviceable option at first base.

Many will say that Holliday is on the decline - true. Although, like Holliday said, there is still a lot of good baseball left in him. Here are some reasons why that very well could be the case. Holliday's walk rate was very low this past year - 8.2% compared to his career average 16.4%. This plays the biggest factor in his deflated OPS, even though he slugged more this year than in recent years. It is not out of the realm of possibilities that Holliday's walk rate returns to the 10-12% range next year. If it returned to 10% and all else stayed constant, his OPS would have jumped from .779 to .811 this year. That's not incredible, but still above average.

Another reason Holliday still has a lot of good baseball left in him is the fact that his BABIP this year was 82 points below his career average. Holliday's .251 BABIP in 2016 is very interesting. It's difficult to understand why it's so low. He's still hitting the ball hard, only making soft contact roughly one-sixth of his at-bats. He actually had higher hard contact rate this year than his career averages which explains his increase in HRs this year. The graph below shows that Holliday has not hit near as many singles as usual compared to his career norms. If there is one place in baseball where your BABIP should get inflated, it would Coors Field. Along with seeing more singles, Holliday should see an increase in doubles too. This increase in BABIP should prop up his batting average and you would think Coors would also help sustain Holliday's power production.

Another reason the Rockies could use Holliday is because he offers superior offensive acumen. In 2016, he hit lefties and righties quite evenly. He hit more of his HRs against righties, but he has hit for a 108 wRC+ against righties and 107 wRC+ against lefties. While the numbers do not look as impressive as his career 136 wRC+ against righties and 138 wRC+ against lefties, there should be solace in the fact that he is remaining consistent. When analyzing his splits in 2016, the statistic that stands out is his home/away splits. He hit for an amazing 143 wRC+ on the road, and a meager 79 wRC+ at home. This does not mirror his career numbers as he has been a better hitter at home his whole career, but it is nice to see that he is able to put up big numbers on the road. Having a patient hitter that knows how to hit on the road is something the Rockies have been looking for so many years now.

The difficult task in evaluating a Holliday/Rockies reunion is cost. Does Holliday deserve a Beltran-esqe 3-Year, $45M contract? Probably not. Holliday was never a good outfielder, Beltran was and still can play in the OF. Holliday will play at age 37 in 2017, and he should be limited to first base or DH which limits his earning power. A good comp could be Billy Butler's 3-Year, $30M contract. Butler does not have Holliday's offensive or defensive acumen, but he did have age on his side. Another comp could be Adam LaRoche's 2-Year, $25M contract or Michael Cuddyer's 2-Year, $21M contract. Ultimately, Holliday will probably get at least $10M/AAV. With his injury history and age, he may not get a multi-year deal though. The Rockies could potentially snag Holliday by selling him on nostalgia, and maybe an incentive-laden contract. This could look like incentives for certain statistical production, or it could look like a sizable vesting option should he meet some certain criteria. Either way, the Rockies guard themselves against poor production or injury by limiting Holliday's earning power in 2017.

The nostalgia behind a Matt Holliday reunion makes all the sense in the world. Bringing back one of the main cogs from your Rocktober miracle season to help lead the young core to the promised land is an easy marketing scheme. Selling the idea to Monfort should also be an easy sell. Holliday returning to the club that drafted him is a big sales opportunity. The logic behind a Matt Holliday reunion makes sense. It is clouded by not having a clear understanding of his earning power. Fitting Holliday's salary into the 2017 payroll is the biggest blockage. Will Monfort create some wiggle room for Bridich? Will Holliday be open to reunion? Time will tell, but Rockies fans can dream. 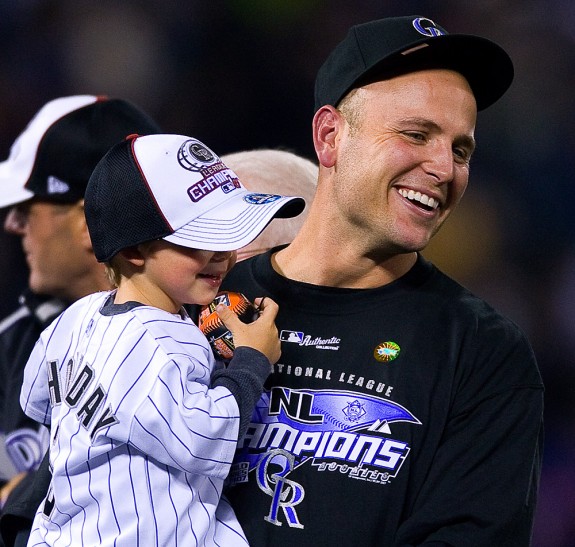 Can the Rockies afford to bring back Holliday?