Rockies starter Jordan Lyles' velocity up, command down in 2016 debut

Jordan Lyles rarely threw a pitch that traveled slower than 94 mph on Friday, but the 25-year-old right-hander couldn't harness the extra velocity and added movement.

Share All sharing options for: Rockies starter Jordan Lyles' velocity up, command down in 2016 debut

DENVER -- Through three batters, it looked like Colorado Rockies starting pitcher Jordan Lyles was well on his way to a strong performance in the team's 2016 home opener against the San Diego Padres.

Lyles' 1-2-3 first inning, which included a strikeout of Cory Spangenberg and required just 13 pitches, was quickly followed by a series of troublesome innings. Lyles escaped bases-loaded jams in the second and third frames before the wheels came off in the fourth. The Padres, who entered the game mired in a 29-inning scoreless streak, scored five runs off of Lyles -- and six times overall -- in the decisive inning.

When it was all said and done, Lyles threw just 45 of 84 pitches for strikes and lasted only 3⅓ innings in the Rockies' 13-5 loss.

"There was certainly a lot of adrenaline early and his velocity showed it," Rockies manager Walt Weiss said after the game. "He was running up to about 96 but for whatever reason the command got away from him -- in the fourth, especially." 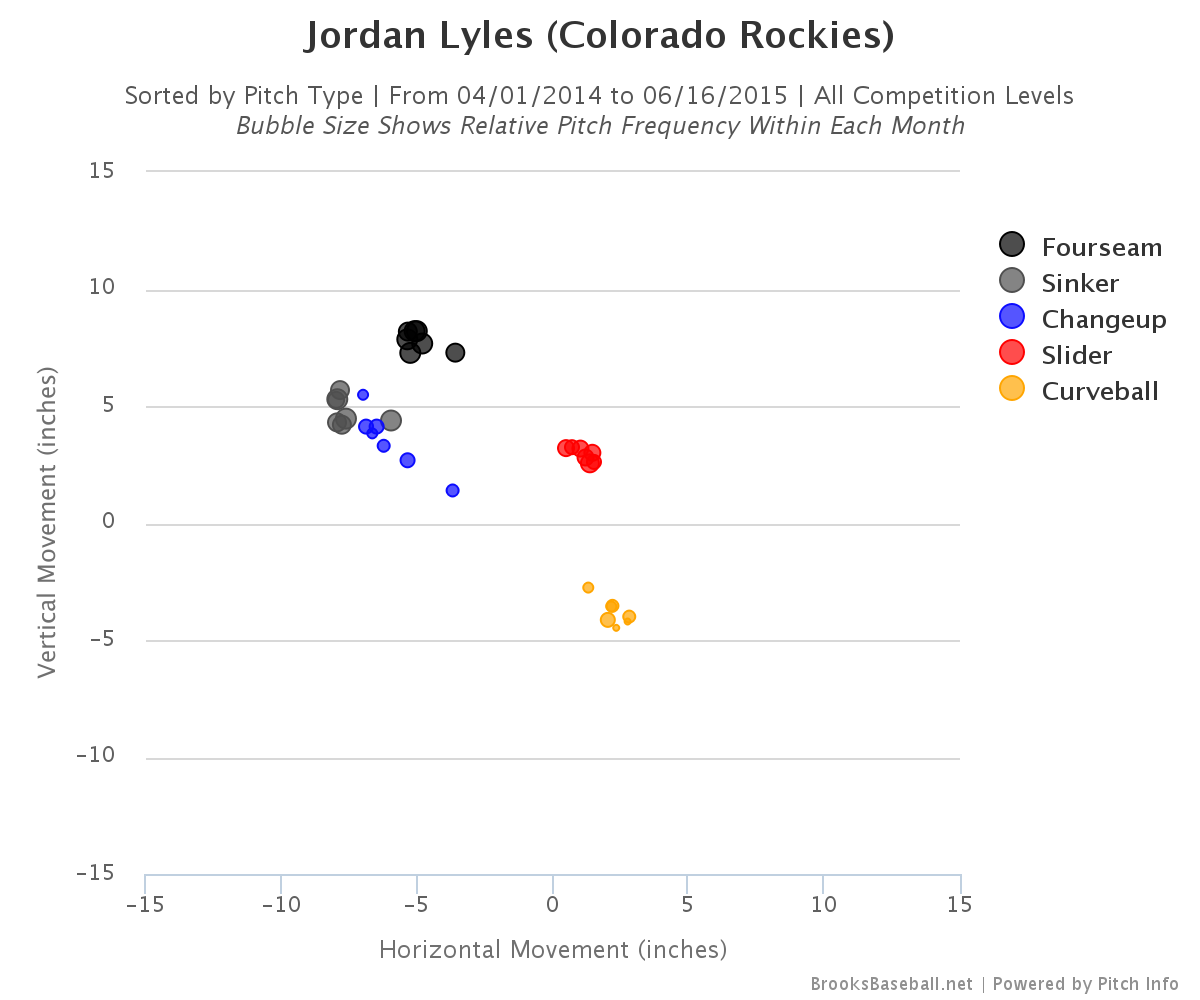 Lyles averaged 90 to 92 mph with his four-seam and two-seam fastballs over the last couple seasons. He rarely threw one that traveled fewer than 94 on Friday. But Lyles -- typically a decent control pitcher (relative to the rest of the Rockies' staff, anyway) in terms limiting walks -- allowed three free passes and hit a batter in the home opener. He also walked Padres starting pitcher Colin Rea on four pitches, starting the San Diego rally in the fourth.

"You can point right to that at-bat," a disappointed Lyles said after the game. "The guy's trying to give himself up for an out. That's uncalled for. I've gotta make better pitches."

Part of the issue, in addition to the increased velocity that was present possibly as a result of Lyles being overly amped for his first big league start in more than 10 months, was that the 25-year-old right-hander was experiencing more depth to his pitches than usual.

"The ball was moving a lot today," Lyles said. "But it's nothing physical. I think just need to be more on the plate and let that action take care of itself."

Throughout his time with the Rockies, Lyles has shown flashes of brilliance when healthy. Having a couple of extra ticks on his fastball with additional movement should help him recapture some of that. But in order to avoid being a perennial 5.00-plus ERA pitcher and start consistently putting together decent outings, Lyles is going to have to harness the added power.

"The ball's coming out decent," Lyles said. "It's to be expected after not being on the mound for [so long]. It just comes down to me making pitches."