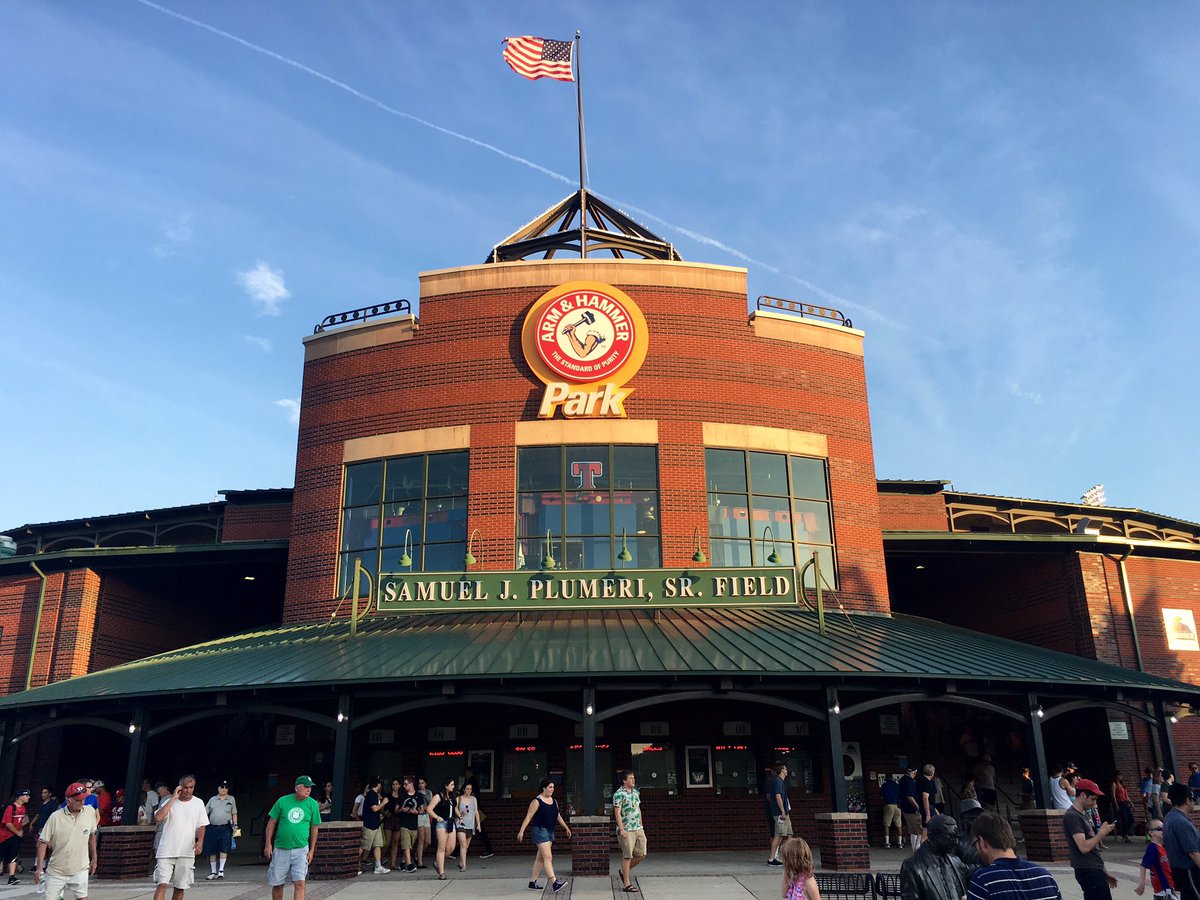 -- TRENTON, NJ. Just a few miles from where George Washington turned the tide of a campaign 240 years ago, no such heroics were in store for the Hartford Yard Goats this weekend. Realistically needing a three-game sweep of the Trenton Thunder (NYY) to maintain any chance of making the Eastern League playoffs, the Yard Goats managed only one victory, likely putting the final nail in this season's coffin.

The series opener Friday evening was a tight affair, with Zach Jemiola getting outdueled on the mound by Ronald Herrera as Trenton claimed a 2-0 victory. Jemiola was good (7 IP, 2 R, 7 H, 4 SO, 0 BB), but his undoing was Dustin Fowler's line drive that tipped off the glove of a leaping Ashley Graeter at second base, as well as an RBI infield single by Jose Rosario. Herrera shut the Yard Goats down over seven innings, holding Hartford to three hits and a walk with no runs and eight punchouts. Former major leaguer and Atlanta Braves fire-balling farmhand J.R. Graham got the two-inning save, fanning Ryan McMahon to end the game with a runner on base.

Saturday's ballgame was another close contest, though this time Hartford came out on the winning end with a 3-1 triumph highlighted by Sam Howard's first scoreless outing since his promotion from Class A-Advanced Modesto. Howard went six innings and gave up six hits and two walks to go along with three strikeouts, and the bullpen passed it along smoothly to New Jersey-native Jerry Vasto to record the save despite giving up two doubles in the final inning. Cesar Galvez was a sparkplug out of the nine-hole for Hartford, slicing a two-run double to left field to put the Yard Goats ahead early. Rosell Herrera and Ashley Graeter continued their late-season surges, too, with Herrera picking up two singles and his 29th stolen base of the season, while Graeter knocked in a run with a third-inning double.

With Hartford desperately in need of a win on Sunday afternoon to reduce the gap to Trenton to five games with 16 to go, the Yard Goats perhaps played their most disappointing game of the year. Exhibiting no signs of life on the mound or at the plate, they were eviscerated 10-2.

It is very difficult to interpret strategic decisions made by minor league field staffs under the direction of a major league club likely emphasizing development over winning, but it is mind-boggling why 29-year-old Carlos Hernandez was left on the mound to die by a thousand cuts in the fourth inning. Hernandez, who came into the game with a 4.81 ERA and who had already given up two runs in the first three innings, gave up six more runs on seven hits before mercifully not being allowed to take the bump for the fifth frame. He wasn't getting bludgeoned in the manner Tyler Matzek did when he came on to pitch, but Hernandez simply wasn't getting anybody out. In Hartford's biggest game of the season, there was no sense of urgency and no moves made to stem the bleeding.

The biggest sign of Hartford's capitulation on Sunday was their woeful last three innings up to bat, when they struck out five times and didn't record a run or even a hit against a reliever who entered play with an ERA over 4, giving up 57 hits over 49.1 innings in the process. At-bats were quick and players retreated into the dugout, seemingly content to get on I-476 and head north to Binghamton.

It was a brutal offensive series overall for the Yard Goats when they could least afford to have one. With the promotions of David Dahl and Raimel Tapia, Hartford's two main weapons are Ryan McMahon and Dillon Thomas, and both had a nightmare at the plate. After recent signs that McMahon had turned his season around, he went 0-10 with eight punchouts and left five men on base. Thomas, who has been consistently good this season while blossoming into a prospect of interest, went 1-11 with five strikeouts and left four Yard Goats stranded. At run-producing spots in the middle of the order, that lack of production isn't going to cut it, though it was somehow reassuring to see the visible frustration that those two displayed after their at-bats. Rosell Herrera and Ashley Graeter did swing the lumber well, combining for eight hits (two doubles), but they weren't nearly enough.

When evaluating Hartford's season as a whole on the field, there can be little conclusion other than that it has been a success, particularly when keeping in mind that they haven't played a single true home game all year. Tapia and Dahl continued their excellent work and have gone on to shine at Class AAA Albuquerque and in Denver, in Dahl's case; Tapia may join him there in September. German Marquez has had a tremendous first season in Colorado's organization and earned himself a promotion to New Mexico with his stellar performances on the mound, while Matt Carasiti saved almost everything in sight on his way to the Rocky Mountains. Thomas has had a breakout campaign and will hopefully build on that next season, presumably in Albuquerque. Herrera has rejuvenated his professional career and is still young enough to have a bright future, though perhaps not the one many Rockies fans expected after his 2013 campaign in Asheville.

The primary disappointment has been McMahon's year at the plate, though he has successfully met the challenge of a defensive transition across the diamond. McMahon has been much better since the Eastern League All-Star break, but likely will need to spend the first half of 2017 in Hartford to show that he is ready for the next level. McMahon is a very intriguing candidate to participate in the Arizona Fall League against other highly-ranked prospects, but this is the third straight season in which he will have played around 130 games and he may benefit from a layoff. Antonio Senzatela has been limited to only seven starts this season due to two long stints on the disabled list; he was fantastic when healthy and appears to be a lock to get more experience this fall or winter, whether in Arizona or back in Venezeula.

Hartford is now 70-55, seven games behind Trenton and presumably playing out the string. In many years, that .560 winning percentage would be good enough to make the playoffs, but Trenton and Reading (PHI) have had unbelievable seasons - Reading's 82-44 mark is just two percentage points behind the Jackson Generals (Class AA-Southern League) for the best in full-season professional baseball.