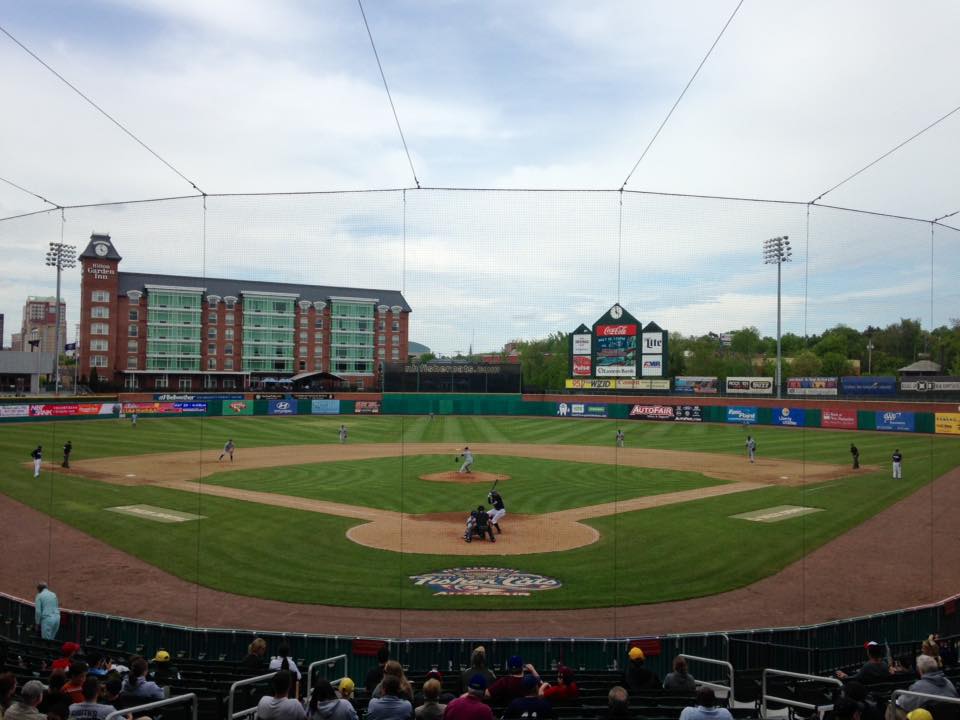 --MANCHESTER, NEW HAMPSHIRE. The Hartford Yard Goats continued their late-season slide Friday, falling to 2-8 in their last ten contests as they dropped both games of a doubleheader to the Harrisburg Senators (WAS).

Game 1 was dominated by Erick Fedde, who showed why many Rockies fans were interested in his inclusion in any potential trade involving Charlie Blackmon. While one nearby scout said that was "never going to happen," the Nationals' 4th-ranked prospect (#84 in all of baseball) showed off his blistering fastball and crisp slider on his way to a seven-inning complete game with eight strikeouts, giving up just one run on six hits and two walks in a 5-1 victory.

Omar Carrizales recorded two of those hits out of the leadoff spot for Hartford, including a double, but was quickly erased on the other occasion when he was caught stealing at second. Ashley Graeter continued his late-season surge, smacking a line drive single up the middle to score Carrizales for Hartford's lone run of the ballgame. Ryan McMahon (PuRP #6) was limited to pinch-hitting duty; he came on in the 7th inning and laced a double off the bricks of the right center field wall, by far the hardest-hit ball of the game for the Yard Goats.

McMahon built on that successful appearance in Game 2, batting second and crushing a two-run homer to the same part of the ballpark. It was not enough for the Yard Goats, who lost 5-4, but two extra base hits and such strong contact were positive signs for McMahon after he entered the day with 14 strikeouts in his previous 25 at-bats. He also made a very nice over-the-shoulder running catch on a popup into short right field; McMahon has been playing first base almost exclusively over the past two months.

Personal favorite Dillon Thomas, who also drew rave reviews from the two scouts in attendance, one-upped McMahon, demolishing a ball that hit the yellow line on top of the 15-foot-high fence in dead center field and bounced off the batter's eye for a home run. Thomas also sliced a ground rule double to left field and came around to score on a Cesar Galvez groundout. It was Thomas' 34th two-bagger of the season, tying him for second-most in the Eastern League despite having more than 100 fewer at-bats than presumptive MVP Dylan Cozens or Christian Arroyo.

Matt Pierpont took the loss after he ran out of gas and gave up a run in the 7th inning, but he was terrific overall in relief of Konner Wade. Pierpont pitched four innings out of the bullpen, giving up that lone run on three hits while showcasing a good breaking ball to rack up four strikeouts in his longest appearance of the season since April 15. As a 25-year-old reliever in Class AA, he is not the sexiest name to watch for prospect hounds, but 68 strikeouts over 62.2 innings to go along with a 3.16 ERA, 1.24 WHIP, and .234 opponents' batting average make for some interest as he moves through the system.

Hartford concludes their series with Harrisburg this afternoon before setting out on a 600-mile bus trip to Richmond, VA for a three-game set that gets underway Monday night.

Stay tuned for an interview with Dana Feigenbaum, who heads all things promotions and marketing for the Yard Goats.