Tyler Chatwood has always been one of my favorite baseball players. He's a bulldog. He doesn't have overpowering stuff, he doesn't have a clear putaway pitch, and he's had a rough history of TJ injuries. But Chatwood continues to find a way to make it back to the Rockies' rotation, with mixed results. One thing he proved last season, however, is that those mixed results may be about to change for the better.

One storyline from last season that may not have gotten as much attention as Trevor Story's incredible start or the bullpen's brutal explosion was that of Chatwood's complete dominance on the road. In 80 innings, he pitched to an absurd 1.69 ERA, and opposing batters hit a dismal .189 AVG against him. He also racked up 6.86 K/9, which won't blow Max Scherzer away but, if taken in context, shows improvement for a pitcher that is more known for being a contact guy. These numbers are nothing short of exemplary for a pitcher coming back from missing about two years with his second Tommy John surgery.

Now of course just as important as his road success were his home failures. His ERA skyrocketed to 6.12 and opponents hit an even .300 against. This obviously does not do.

But something to consider:

Whether at home or away, his advanced metrics were a bit more similar. His K/9 at home and on the road were 6.46 and 6.86, respectively. His BB/9 were 3.92 at home, and 4.05 away. So what does this mean? Well, it means that Tyler's stuff is there. It means that he needs to cut down on walks. But, maybe most importantly, it means that Chatwood may be as good as a No. 2 starter soon. 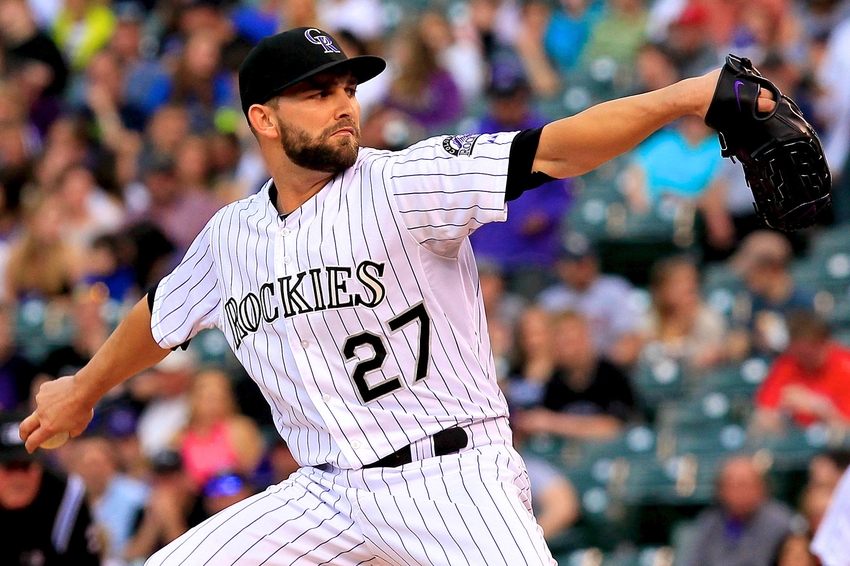 Why do I believe this? Well for one, it means that Chatwood has swing-and-miss stuff at home. Obviously he was knocked around far more at Coors, but he has the capability to miss bats at altitude, at a rate that most other pitchers cannot. His walks are an issue as they've always been, but if he can cut those down, it should translate both at Coors and away. That's important, because part of the high ERA at home is due to the fact that putting runners on base in Colorado is far more likely to end in the runners scoring than, say, San Diego. That's obviously a critical part of Chatwood's game that, if remedied, could completely change his approach and lead to success.

So what's this all leading to? It's simple: Tyler Chatwood could end up being, at least in the short term, the No. 2 starter. See, Chatwood's road splits are going to come back down to Earth a bit. That's not a knock against him, it's just the reality. But let's say he could go the same to his home splits; that would make him a more complete pitcher, and if he could replicate half of the results he found on the road, he could be a great compliment to the sheer force and K-power of Jon Gray. Having this version of Tyler Chatwood in the rotation - cool, confident, and effective, whether in Colorado or not - could put the Rockies over the edge of Wild Card hopefuls to legitimate contenders. Gray has been lauded as the ace (and rightfully so), Bettis is the workhorse and staff veteran, Anderson is the young arm fine-tuning his electric stuff, and Hoffman or Marquez will be the fifth man. But don't sleep on Tyler Chatwood... he could be the key.