In this Fanpost, I jump further down the ‘Coors Hangover’ rabbit hole. Previously, Matt Gross made the convincing case that the Coors Hangover was real in a seminal 2014 article. Matt’s most important finding was that when you use park-adjusted stats, the Rockies were an average offensive team at home but much, much worse on the road than any other MLB team. Matt examined 2002-2014 wRC+ for all NL teams and found:

This offseason, I updated Matt’s research with more recent data. I found that more recent statistics show … the exact same trend. The Rockies have continued to be average hitters at home and fantastically awful hitters on the road.

If the Coors Hangover explains the woeful road offense, shouldn’t the effect be smaller early in the season?

If the problem with the Rockies road offense is the adjustment from Coors, shouldn’t the effect be smaller at the beginning of the year and get worse as the season progresses? Certainly, there should be no hangover before the Rockies have even played at Coors (and they always start on the road)! Luckily, FanGraphs (thanks FanGraphs!) allows us to break down each team’s month-to-month home/road splits. I looked at the years 2006 to 2018.

To start, we look for league-wide monthly trends and find none. The figure below shows the monthly home (top, darker line) and away (lower, gray line) wRC+, averaged over all MLB teams, over the 2006-2018 seasons. There is some gentle monthly variation but nothing dramatic. As expected, hitters fair better at home, by 7-10 points. 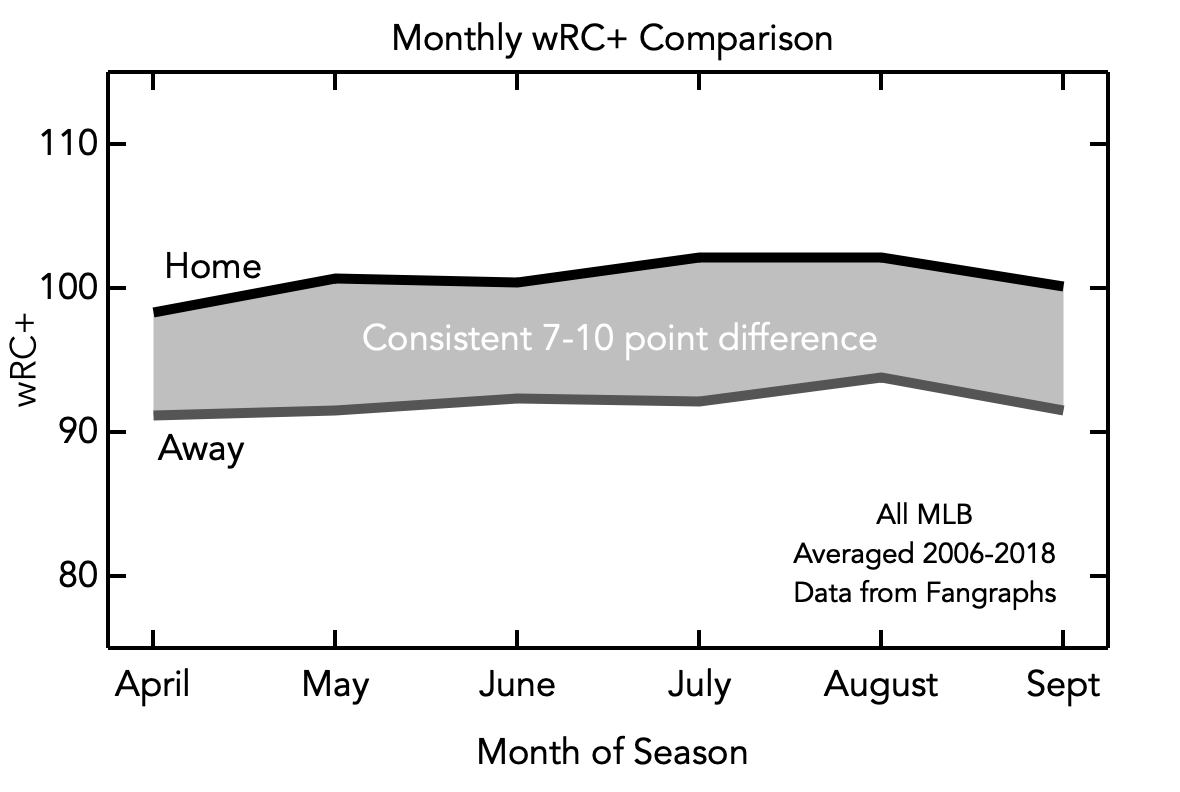 In stark comparison to the rest of the league, the Rockies wRC+ evolves dramatically in the early part of the season. The graph below shows the same league-wide data as above, together with the Rockies’ home and away wRC+. In April, the Rockies are actually an average road team. However, the team quickly fades on the road and plateaus with a fantastically bad wRC+ ~ 77 from July through September (on the road, the team as a whole hits like 2018 Miguel Rojas). At home, the Rockies actually hit poorly at Coors Field in April before picking up and hitting a bit better than league average (on a park-adjusted basis) for June-September.

My simple explanation: Coming out of spring training in Arizona, the Rockies hit just fine on the road. However, as they adapt to hitting at altitude, they struggle to re-adjust to hitting on the road. Just as you would expect if the Coors Hangover were real. 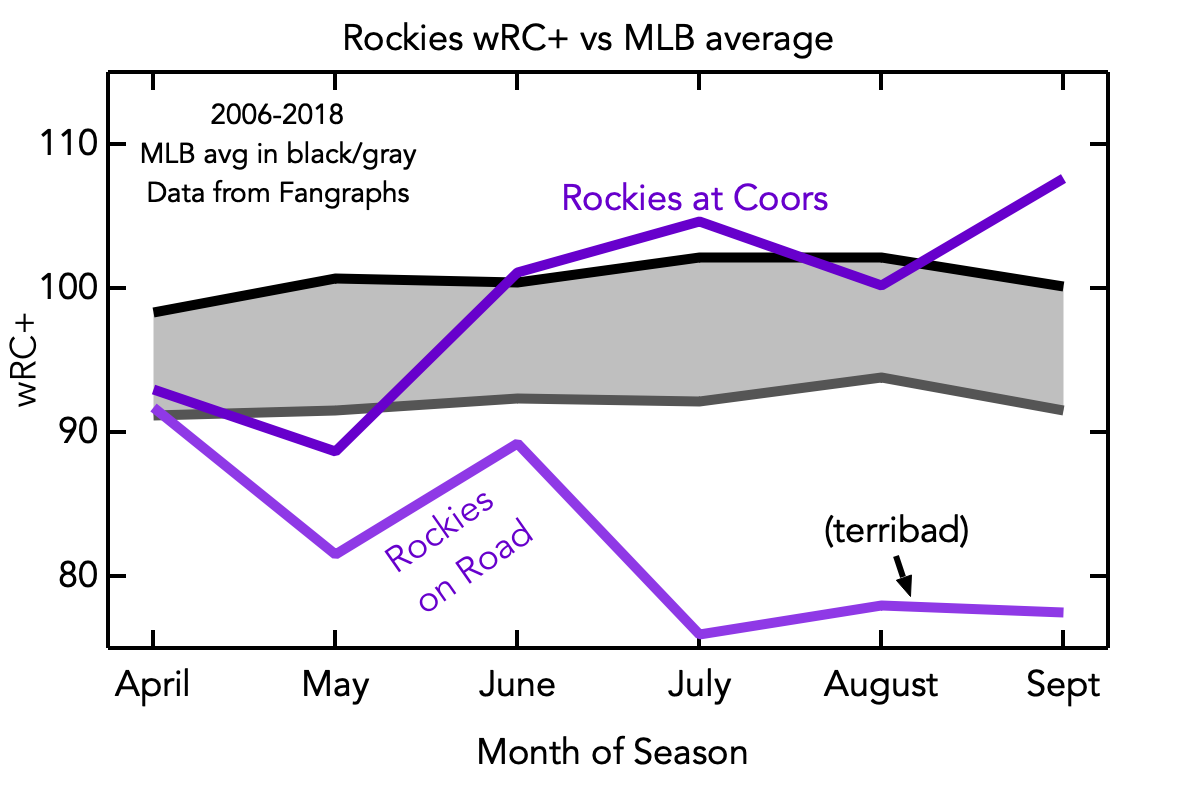 The Rockies are the only team with this crazy evolution. Below, I show the difference in home and away wRC+ for all MLB teams, with the Rockies highlighted in purple. There is a fair amount of variation month-to-month for other teams. But no other team shows anything like the Rockies’ evolution-to-awful. 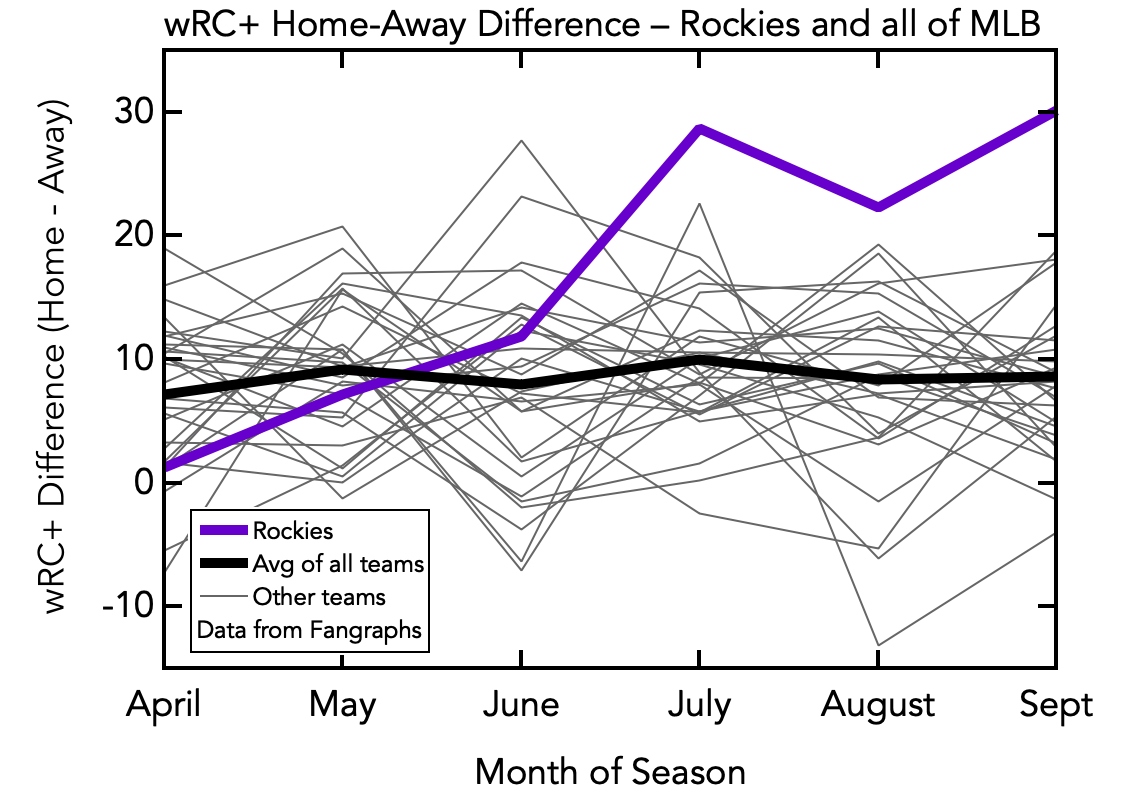 How does the Coors Hangover actually impact at-bats? The most obvious answer is that Rockies hitters who are used to hitting at altitude struggle to pick up and barrel pitches with more movement. This should result in more swings and misses, weaker contact and a lot more strikeouts. Below, I plot the average MLB and Rockies strikeout percentage at home and on the road. League-wide, batters strike out about 1% more on the road. In contrast, the Rockies strike out ~1% less than average at home … and 1-4% more than average on the road!

There is lots of interesting stuff here. The Rockies strike out about 18% of the time at Coors and this is pretty consistent month-to-month. This suggests that it is simply easier to see pitches with less movement at altitude. It is not evidence of the Coors Hangover. On the road, the Rockies strike out more than league average all year, even in April. However, their K% increases every month and reaches stratospheric rates by mid-summer. The consistently increasingly K-rate is evidence of the Coors Hangover.

[By the way, note that strikeouts go up league-wide in September. This may be due to expanded rosters and the increased use of relievers who can go all-out for a single inning. Expanded rosters are dumb.] 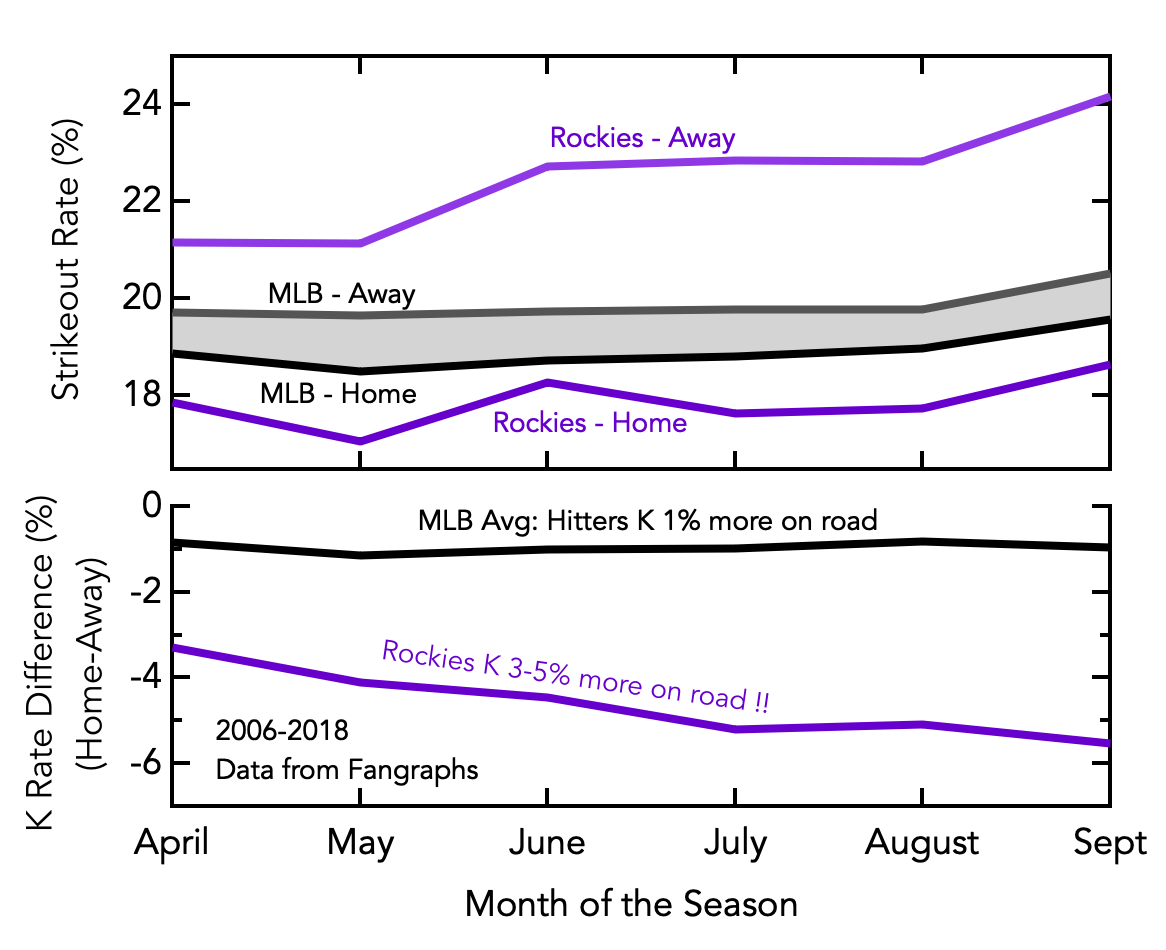 The Rockies should play the vast majority of their road games during the season’s first half.

The Rockies are in a unique situation. While their overall offensive numbers will always be excellent (well, at least ones that are not park-adjusted), they suffer an unfair disadvantage on the road.

However, the month-to-month variations suggest a solution. THE ROCKIES SHOULD PLAY THE VAST MAJORITY OF THEIR ROAD GAMES DURING THE SEASON'S FIRST HALF. Specifically:

This (admittedly radical) schedule change would minimize the impact of the Coors Hangover and even the playing field.
Plus, late summer and fall games at Coors Field are delightful. Early spring games, not so much.

The correct answer to this poll is: