When the Rockies signed Chad Kuhl this past offseason to a one-year, $3 million deal, they made it clear the plan was for him to be the fifth starter. Now I’m not usually one to gripe with player salaries, but it seemed like a lot of money and responsibility for a player that was relegated to the bullpen for literally the Pirates last season. To my surprise and delight though, Chad Kuhl has shoved so far, and has been a big part of the Rockies’ decent start. Is it sustainable? I think we all know that it’s probably not, at least at this level. But is Chad Kuhl better than we (or at least I) thought? That’s something that merits more investigation.

Has Chad Kuhl been better?

This question has a pretty obvious answer, which is yes. Through 5 starts, his ERA is a full three runs lower in 2022 than it was in 2021 (from 4.82 to 1.82). While his underlying numbers don’t suggest quite such a drastic change, his FIP still sits at a solid 3.38. Noticeably, his walk rate, which has been at a nearly untenable level in the past two seasons, has also decreased dramatically. He is walking only 8.1% of his batters faced this year, right about at league average.

Not all of Kuhl’s numbers suggest this massive leap though. His HR/FB rate sits at a paltry 6.7%, well below the league average of about 10%. Kuhl has done well to avoid the longball this year, but it’s tough to believe that will continue. He has run HR/FB rates above 15% for each of his last 3 seasons, and while that might be an indicator of some bad luck, I still expect him to regress back to the mean in this regard. Even still, Kuhl’s xFIP, a fielding independent stat which ignores a pitcher’s HR/FB rate, sits at a perfectly respectable 3.84.

The most concerning and obvious red flag though, is Kuhl’s miniscule .179 BABIP, good for the lowest rate in baseball among qualified starters. Sure, some pitchers are able to consistently run lower BABIPs, but it takes a lot more than 5 starts for that to stabilize, and Kuhl doesn’t have a history of overperforming in that regard. Certainly, hitters are going to start having more balls fall in for hits against Kuhl, especially as he pitches more at Coors. But Kuhl really has done a good job of limiting hard-hit balls at good launch angles this year. All of his expected stats from Baseball Savant, which are built off of exit velocity and launch angle, are well above average, as is his barrel percentage.

How has Chad Kuhl been better?

Kuhl has made a few changes which seem to go at least some way to explaining his surprise start. Most noticeably, Kuhl has made his sinker his primary fastball, while significantly reducing his four-seamer usage. While neither his four-seamer nor sinker have been very successful pitches in the past, this has been a welcome change. Despite having above average velocity for a starter, Kuhl’s fastball spin rates have always been subpar. The result on his four-seamer is a running fastball without tremendous velocity and with below average carry, which isn’t exactly a recipe for success. For sinkers however, lower spin rates can actually be beneficial, as less backspin means more sink. At Coors Field, this is especially helpful, as high backspin fastballs won’t get their usual carry in the thin air anyway. Thus, the sinker plays into Kuhl’s strengths much more than the fastball he threw a quarter of the time last year. This probably was a big reason the Rockies signed him; Kuhl has mentioned that he’s been told his stuff is "Coors-friendly." The resulting sinker is an unremarkable but passable primary offering which sets up Kuhl’s true weapon: the slider.

While the slider has always been his most reliable pitch, it has been more effective than ever this year. Kuhl’s whiff rate (the proportion of swings that are whiffs) on his slider is above 50%, grading out as one of the premier pitches in the entire league by that metric. Almost all of Kuhl’s strikeouts this year have come on the slider; it has developed into the putaway pitch he’s been needing for his entire career in this small sample of games. Just by watching the slider, though, it doesn’t appear to be anything special, to my eye anyway. It doesn’t have the horizontal sweep that is so en vogue in MLB today, nor does it have the exceptional velocity and cut that we see from some of the best pitchers’ sliders. No, it’s a rather unremarkable gyro-spin slider with below average horizontal movement and good velocity. Then how has it become such a great pitch for Kuhl? Well if a successful pitch doesn’t have great stuff, it’s probably well located, and that’s exactly the case with Kuhl this year. Take a look at this plot of his slider locations this year and last year. 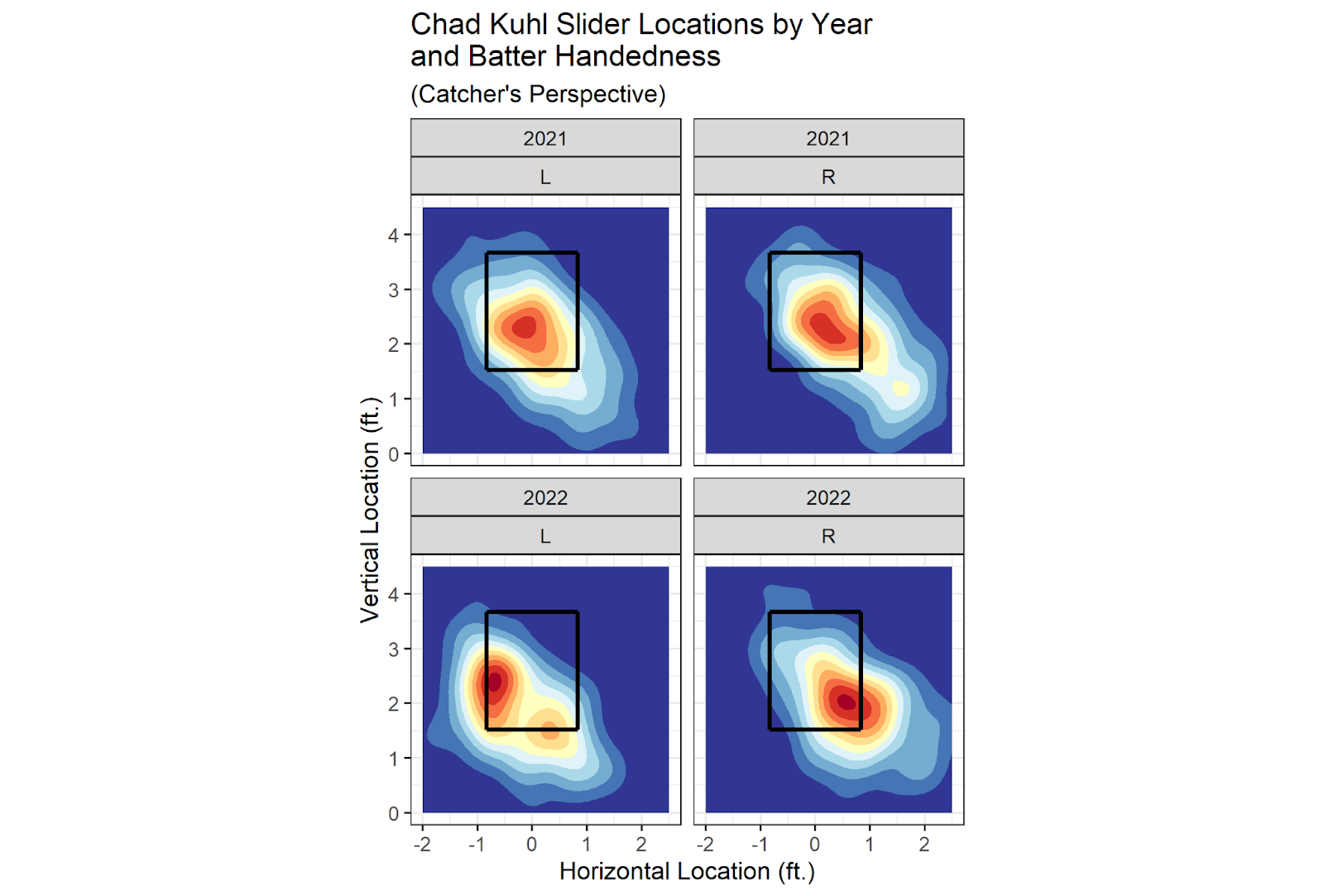 Last year, Kuhl was kind of just throwing his slider in the middle of the zone. That can work if you’ve got a giant sweeper with so much movement it’s tough to hit no matter where it is. But that’s just not the case with Kuhl’s slider. His slider locations have been much better so far this year - pounding the edge of the striking zone with backdoor sliders to lefties, and living low and outside to righties. Kuhl's slider looks to also benefit from the so-called seam-shifted wake effect. This effect basically causes the ball to move through the air in a direction that isn’t wholly determined by the spin of the pitch. We can see this effect illustrated by the spin direction and movement plots on Baseball Savant.

If you’ve never seen these plots before, they might be a bit difficult to understand at first. The left plot shows the direction of movement that comes only from the spin of the pitch. The right plot shows the observed direction of movement of the pitch. You can see the difference in the position of the yellow bars (slider) between the two plots. The spin-based movement direction centers at about 11:00 on the "clock", but the observed movement looks to center around 9:30 on the clock. This difference is likely due to some seam-shifted wake effect that Kuhl gets on his slider. The result is a pitch that gets more horizontal movement than expected from just the spin, and also a pitch that mirrors the movement of the sinker nicely. How helpful is this mirroring? I’m not sure, it might not have much of an effect at all, but it is a byproduct of both his seam-shifted slider and increased sinker usage.

So how has Chad Kuhl been better? Certainly walking less batters helps. A league-low BABIP probably helps even more. But Kuhl has made changes, and most of these changes are working out for the better. He ditched a mediocre fastball for a Coorsy sinker, and is dotting his slider to batters on both sides of the plate.

Will Chad Kuhl keep being better?

As I said at the beginning, Chad Kuhl will not be this good for the rest of the season; you don’t need to be a big-brain baseball genius to figure that out. His stats will regress: he will give up home runs, he will have games where hits start falling in all over the field, and he will likely have games where he doesn’t have his control. But the question is, can he continue being just a little bit better than his previous self? I think the key for him is the slider. If he can continue locating it as he has been, it should continue to be a very effective pitch for him moving forward. If he can do that, he will have been a capable filler for a Rockies staff thin on depth. If not, it’s likely a stay in the bullpen. But give Kuhl and even the Rockies credit for identifying his strengths, and changing his approach to fit this team.